The world’s best riders got a chance to show off their slopestyle skills at Cardrona yesterday afternoon as the first snowboard event of the Audi quattro Winter Games NZ 2013 got underway. One of the favourites for the gold medal, USA’s Shaun White crashed out in training and will take no further part in the slopestyle comp.

Two out of the four men’s qualification heats for the FIS Snowboard World Cup Slopestyle took place after an initial weather delay that also forced the postponement of women’s qualification. The two women’s heats and two remaining men’s heats will now take place today (Monday) with the top qualifiers going straight into the finals.

Cardrona’s challenging six-feature course starts with a wall ride that allowed riders to express their creativity from the outset. This led into a set of rails followed by a choice of pole jam or rainbow rail, and then into a set of three jumps ranging in size from 50ft to 62ft.

The other qualifying riders were Maxence Parrot (CAN), Roope Tonteri (FIN) and Peetu Piiroinen (FIN) from heat one, plus Clemens Schattschneider (AUT), Ulrik Badertscher (NOR) and Billy Morgan (GBR). New Zealand’s Liam Ryan and Milu Multhaup-Appleton failed to progress as did Australian trio Tim Laidlaw, Declan Vogel-Paul and Nicholas Wood.

Head judge, Ola Sundekvist said: “We’ve had a hard time with the weather and hopefully it’ll be better for the rest of the week. The course looks good so hopefully it works out.”

Snowboard slopestyle makes its Winter Olympic debut at Sochi 2014 so Winter Games NZ is an important opportunity for elite riders to gain valuable qualification points in the first FIS World Cup event of the season.

Over at Coronet Peak, bluebird skies could not make up for mild overnight temperatures that meant the postponement of the FIS Australia/New Zealand Cup Giant Slalom Men. The event is now scheduled for today (Monday) with ski racers from countries as varied as USA, Monaco, Uzbekistan and Japan set to compete. The home crowd will be cheering for Ben Griffin and Queenstown boy, Adam Barwood who has been in particularly good form this season. 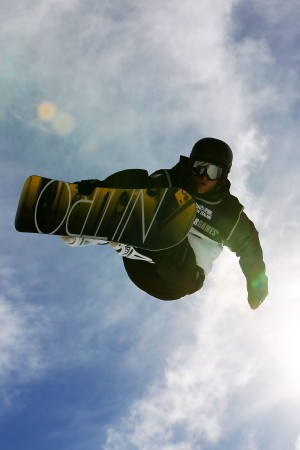