119 competitors ranging from U10 to Senior, male and female racers from around the North Island enjoyed  a spectacular race in Pinnacle Valley at Whakapapa, Mt Ruapehu on Sunday 14 August .

The clear blue skies and the firm packed snow proved the perfect conditions for the racers and spectators alike. With a cool light breeze the snow held for the day, with a start at 10:40 finishing with the young athletes later in the afternoon.

The racers turned out great performances with the trophies on the day going to Joseph Farnsworth and Nicole Postlewaight.

The Race Organising Committee were delighted to have Simon Wi Rutene as the Technical Delegate and all agreed that it was great working and learning from Simon over the weekend.

Ruapehu Snow Sports would like to thank all those who volunteered and especially to those who have chosen to join the team and are quickly upskilling in a number of roles.

The next race on the calendar for Whakapapa will be the North Island Primary & Intermediate Schools Snow Sports Champs starting on Monday 22nd August for three weeks, then followed by the North Island Champs.

Unfortunately the Slalom races could not be run due to adverse weather. Entry fees for this event will be refunded this week. 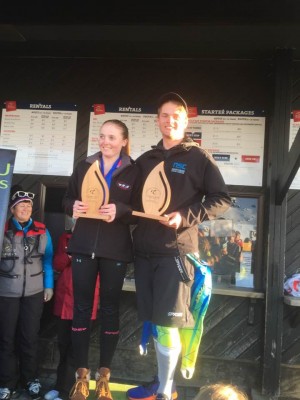