Poor weather in Vogel meant that the Europa Cup came down to a one run only event. Two Europa Cups were held on the 9th and 10th March with Ben finishing in 6th place in the first event.

"I landed my run on the first day of the competition which put me in 6th which I was happy about but I knew I could do better," explains Ben.

He decided to tweak his run opting for more style points by changing the second jump trick from  a switch left bio 9 safety to a switch right rodeo 5 double japan. The judges liked his choice and awarded him top marks for the win.

Ben is now now off to his first ever Slopestyle World Cup in Seiseralm, Italy from 14-16 March and will then travel to St Anton, Austria for another Europa Cup followed by a double Europa Cup in Livingo, Italy. 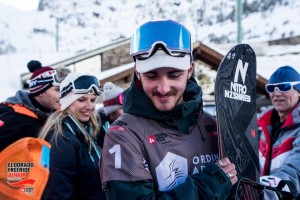