“The course was perfectly groomed, clearly marked and the aid stations had tonnes of lollies and hot drinks. Liz and I skied together the whole way, it was such fun and an awesome intensity session,” she said.

Simi Hamilton said he would definitely return after skiing the Merino Muster this year for the first time.

“It’s a beautiful spring day, the snow is super-fast and the energy and atmosphere were just great. We had a bunch of people cheering us on as we went by and all the volunteers were doing a great job at the feed stations. We always feel welcome down here so we’re looking forward to coming back and doing it some more in the future,” he said.

Wanaka locals Rachel Knott, originally from USA, and Snow Farm’s Swedish sport manager, Henrik Forsberg took the final podium places followed by 98 more age group skiers and Worldloppet Masters many of whom had travelled to New Zealand from all over the world especially for the race.

First Kiwis home were Ben Falconer, tenth overall and winner of his under-40 age group, and Ann Smaill who won her under-60 age group and finished seventh overall in the women’s race.

The 21km Snow Rake was dominated by members of the Korean cross country ski team who took the top five men’s and top four women’s places.

Reigning 30km national champion Yong-jin Cho took the men’s race in a close finish from Jun-ho Hwang and Seong-beom Park. Top Kiwi was Campbell Wright who put in a hugely impressive performance to finish sixth overall and win the under-16 boys’ category.

Wright was second in last weekend’s shorter-distance 7km Joey Hoppet held at Falls Creek during the Australian leg of the Worldloppet series. He studies at Wanaka’s Mount Aspiring College with fellow skier Louis Jones who was close behind today in eighth place overall after finishing fifth in the Joey Hoppet.

In the women’s 21km race, Chan-won Lee finished more than two minutes ahead of teammates Hye-ri Ju and Da-som Han. Keri Barnett was the best place New Zealand woman, fifth overall and winner of the under-50 category.

Spectators and competitors in all races were treated to a sausage sizzle, drinks and lollies staffed by a band of enthusiastic volunteers. A special 1km Mini Muster for under-10s was followed by prize giving upstairs in Snow Farm Lodge and a social event at the famous Cardrona Hotel to complete the day’s programme. Full results are available at www.merinomuster.com.

“There’s always a wonderful atmosphere at the Merino Muster and the weather certainly played its part. The sun shone, the racing was superb and everyone can be proud of their performance,” she said.

“I would like to thank all competitors and their support crews, many of whom have travelled half way around the world to be with us, along with the whole event team and especially our wonderful volunteers without whom the race simply could not happen.”

Image: The Start Line at the 2016 Merino Muster 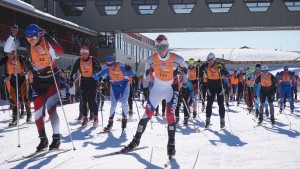