Slalom proved to be the NZ team’s most successful discipline at Trofeu Borrufa last week (30 January - 2 February 2017) in Andorra with Will Cashmore taking home the bronze medal and Sam Hadley finishing fourth. Both boys were less than a second off the leaders after the first run and skied very well in the challenging snow conditions.

The NZ athletes including Sam Woods, Jack Harman, Aidan Wilkins, Sam Hadley, Annabelle Eady, Rose Hadley and Will Cashmore arrived at the 25th Trofeu Borrufa at Vallnord Arcalis to find soft and difficult snow conditions for the week.  The organisers did an excellent job managing the snow conditions to maintain the race programme for the week.

Will Cashmore skied to third place with a strong second run in the U16 Men’s Slalom on day one.

“Going in to the event I was pumped to ski alongside some fast Euro skiers and when my skiing clicked for the Slalom race, I was stoked!” says Will. “It was an unreal feeling.”

On day two, Sam Hadley was also placed third in the U14 Men’s Slalom after the first run, but unfortunately had a problem early in the second run to finish fourth overall.

In the U14 Men’s GS, Jack Harman and Aidan Wilkins both successfully completed their first International Children’s race finishing 26th and 34th respectively.  The soft snow and flat light in the first run of the U14 GS resulted in several DNFs including both Sam Hadley and Sam Woods.

On the ladies’ side, Rose Hadley placed 23rd in the U16 Slalom with Anabella Eady unfortunately coming out in the second run and not finishing.  Both girls completed the GS on day two with Rose finishing in 18th place and Anabella 30th overall.  Will Cashmore delivered a solid U16 GS to finish in 10th place to give the team two top 10 results for day two. Sam Woods, along with Jack Harman, also bounced back well after the DNF on day one to finish the U14’s Men’s Slalom in 24th as a first year athlete with Jack placed close behind in 25th.

The Alpine Combined and Super G events on days three and four were not kind to the NZ athletes. With the benefit of experience Rose Hadley adapted her skiing to suit the conditions and was the only athlete to secure another top 10 result for the team with a ninth placing in the SG on day four.

Will and Rose both skied solid slaloms in the Alpine Combined to be well placed after the first leg, but some line issues in their first look at an SG race course resulted in their overall placings dropping to 14th and 21st respectively.

Despite the difficult conditions at times, the event served as an excellent build up for the athletes moving into other competitions and provided valuable international race experience for the younger athletes. Sincere thanks go to coaches Andrej Bozic, Luca Valsecchi and Jamie McWilliam for their hard work during the week.

The next International Children’s race for New Zealand athletes is the Pokal Loka in Slovenia. Alice Robinson, Keir Roberts, Will Cashmore, Vanessa Lover and Sam Woods will be racing from 11-12 February.

“With Pokal Loka approaching I am excited to get a bit of training in before hammering further races,” says Will. 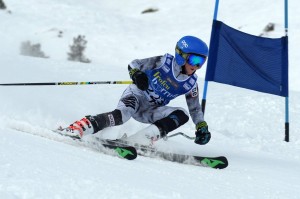