Aspen, USA (16 February 2015) –With two weeks to go until the IPC Alpine Skiing World Championships in Panorama, Canada, New Zealand’s top para-skiers Adam Hall and Corey Peters have been adding to their season’s medal tally with podium results at the U.S National Championships and IPCAS races in Aspen.

Racing began on 12 February with two days of downhill. Adam Hall took the win in men’s standing on both days while Corey Peters placed third in men’s sitting on day one and first on day two. Adam was particularly pleased with the results having not raced the downhill discipline in several years.

“It was an amazing feeling. This has been a good season to go out and just try all the events to help push my skiing to another level. It really helps to keep that fire and motivation going.  It is a pretty crazy feeling when you’re heading down the mountain at such high speeds, such an incredible rush.”

Saturday’s Super-G saw a great run from Adam and another victory. With a comfortable lead he appeared to have the super combined in the bag until, carrying speed in the slalom run, Adam skied around the wrong gate four gates from the finish and the mistake cost him the race.

Corey put down a strong first half of his super G run, dealing with the most technical section of the course with ease. Hitting a bump on the lower section that sent him flying into the air, he came out of the course but thankfully avoided injury.

The race series finished on a high with Adam and Corey both winning their categories in the US National Championship Super G against major rivals such as Tyler Walker (USA) in the men’s sitting and Mitchell Gourlay (AUS) in the men’s standing.

“The races have provided a good benchmark for Adam and Corey ahead of World Champs,” says Snow Sports NZ Adaptive Manager Jane Stevens.

The IPC Alpine Skiing World Championships will take place in Panorama, Canada, between 28 February and 10 March. 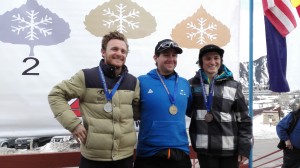