Riders each had three runs to earn their top score on the 650-metre-long course which features a wallride, staircase and a highrail in the first section followed by a kicker line of 3.50 metre high jumps.

Tiarn stomped his first run with technical rail line and super smooth backside double cork 1260 melon for a score of 68.40. He pushed himself hard over the next two runs but was unable to better his first run score.

Only his second ever start in a World Cup Slopestyle event and first crack at finals, the sixteen-year-old was still delighted by the result.

“I had an epic day today!” he says. “I was really happy to land my run in qualifiers and earn a spot straight through to finals and it was awesome to have my teammate Carlos right up there with me. It’s good to see the NZ flag up there in the top 10, I’m stoked.”

Carlos Garcia Knight left it to his last run of three to put down his best. Feeling the pressure after crashing his first two runs, he managed to hold his nerve and make a statement with his super technical switch backside 1260 and frontside double cork 1080 with chicken salad grab which he sent far down the landing and baffled his competitors by managing to ride away from it.

“I went huge on the last jump, and managed to hang on to it but the landing was sketchy so I lost a few points there,” Carlos explains.

“It was a great start to the competition slopestyle season to have the boys perform so well against the world’s best and for both to walk away with a top eight finish was very exciting,” says their coach Sean Thompson.

The qualifying period for the 2018 Olympic Winter Games is now underway and these results will tick boxes for both athletes.  Snow Sports NZ and the NZ Olympic Committee require an athlete to compete in a minimum of four World Cups or three World Cups and a World Champs event within the qualifying period, and achieve two top-16 results at these events.

Mons Roisland (NOR) was the winner of the men’s world cup slopestyle. The Norwegian, who had to take the semi-finals detour to qualify for the finals of the best ten men, edged off 2015 world champion Ryan Stassel (USA, 83.30) to second place. Up-and-coming 16-year-old talent Redmond Gerard (USA) rounded out the podium in third.

Kreischberg is the first of five slopestyle World Cup stops this season with Laax (SUI), Seiser Alm (ITA), Mammoth Mountain (USA) and Quebec City (CAN) following within the next four weeks. 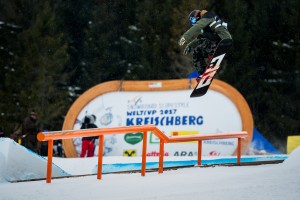