Tom Brownlee, George Pengelly and Anna Smoothy through to Finals at The North Face Freeski Open

Freeriders from all over the globe had two runs to impress the judges and at the end of the day Fabio Studer and Tove Kockum took home the honour of top qualifying positions.

The chance to qualify for the finals, a 3 Star Freeride World Tour Qualifier competition, saw many big international names turn up to the Remarkables. The picturesque resort just out of Queenstown received a good dumping of snow before the competition and the stage was set for an epic qualifier. The snow was good and although the visibility and wind caused some issues to begin with, all of the fifty plus riders got their two runs down the competition venue.

“We were really lucky with the fresh snow before the event,” said Head Judge and Freeride World Tour Head Judge Dion Newport, “there was a really good turn out for the qualifying day. Yet the real stand-outs were the juniors, who really pushed the level in the limited visibility.”

In the menʼs division Austrian Fabio Studer took the top qualifying position with a fast and fluid run that included a number of airs and a styled out 360. He really blitzed the entire venue and judges were very impressed with his flawless run.

In close second was Cantabrian Tom Brownlee, who has been steadily moving up the New Zealand freeriding ranks, most recently with a win at last weekʼs Chill Series at Mount Olympus.

In the ladies' competition Sweden’s Tove Kockum, won the qualifier with a technical run that included a number of airs and some smooth and controlled skiing.
Coming in second place, Wanaka local Anna Smoothy charged down the face with no hesitation, reminiscent of her brother Sam, a well-established skier on the Freeride World Tour. In third place was Alex Brook, who just managed to squeeze into the finals despite her strong performances in the Chill Series and Temple Basin Freeride last weekend.

The finals will be held tomorrow in the Alta Chutes at the Remarkables, weather permitting.

Today’s qualifiers will go head to head against the pre-qualified athletes, including recent FWT qualifiers Charlie Lyons and Nat Segal, FWT competitors Neil
Williman and Janina Kuzma, as well as a few more veterans from the NZ Freeride Scene. One thing’s for sure, it’s going to be an epic competition! 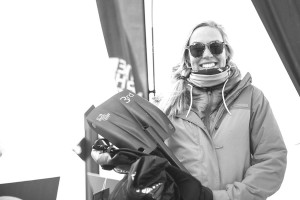