Seiser Alm, Italy (25 January 2017) – With the 2016-17 Slopestyle World Cup season now in full swing, the Cardrona NZ Park and Pipe team has travelled to the South Tyrolean resort of Seiser Alm for the tour’s third event. The snowboarders were the first to take on the six feature course for today’s qualifying rounds with NZ’s Tiarn Collins (Queenstown) once again putting together a strong performance and making the cut for semi-finals.

Split across two heats, the top three competitors from each took a direct route to finals while the next five from each heat moved through to semi-finals. Tiarn Collins finished fourth in his heat while team mate Carlos Garcia Knight (Christchurch) finished ninth (18th on overall placings).

“The boys had to really dig deep in the trick bag today,” explains coach Sean Thompson. The six feature course comprised a standard rail line up top but, rather than three progressively larger jumps, the kicker line started with a small jump, to a large jump and then back to medium size calling for competitors to mix up their usual competition runs.

Although still new to the World Cup circuit, sixteen-year-old Tiarn Collins proved his versatility as a competitor, rising to the challenge by landing five of his six tricks switch and stomping his switch back nine, back 12 and cab 10 on his second run.

“Today went really well!” he says. “On my first run I reverted on the second jump and only got a score of 54.00. On my second run I was able to put down a clean run scoring 81.75 which put me fourth in my heat and into semi-finals. The highlights of my run were my all switch rail line, and my combo on the jumps – a line I’ve never done before.

“I’m super-excited for finals on Friday.”

The World Cup is running simultaneously with the X-Games in Aspen - meaning some of the sport’s big names like current  snowboard freestyle overall World Cup title leader  Max Parrot were not on the start list. However, with the likes of the 2011 world champ Belgium’s Seppe Smits  and the UK’s Billy Morgan – the first person to land a backside 1800 quadruple cork – topping their qualifying heats the men’s finals still promises to be an impressive showdown.

Corrah Phillips (Wanaka) and Natalie Good (Cambridge) were also in competition in Seiser Alm today and finished seventh and eighth respectively in qualifying heats. Only six female competitors will compete in Friday’s final. 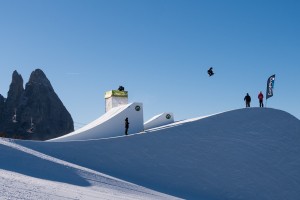