Tiarn Collins Through To Semis at Laax Open

Laax, Switzerland (17 January 2017) – NZ snowboarder Tiarn Collins (Queenstown) has put together another promising performance at World Cup level, finishing third in his qualifying heat at the Laax Open Slopestyle and moving through to semi-final rounds.

The world’s snowboarding elite has gathered at the Swiss resort this week for one of the key snowboarding events in Europe this season. Despite snowfall in the morning it was possible to run the qualifications as scheduled. Riders had two runs on the 500m long course, with the best one counting. Men were split up in to four heats, with the top six riders from each heat making it into the semi-finals.

Tiarn started off super strong, landing his first run and incorporating a back 5 alley oop and his signature backside double cork 1260 melon grab. His score of 72.25 put his in third place in the heat behind Finland’s Kalle Jarvilehto on 88.25 and Canada’s Max Parrot on 78.25.

“Competing at this event has been one of my dreams since I was a little kid so it’s crazy enough just to be in it and then on top getting through to semis!” he says.

Team mate Carlos Garcia Knight did not fare so well. Although he managed to stomp his first run, some technical difficulties with the cameras meant the judges were not able to give him a score and Carlos was required to take a re-run. He landed again but a bobble on his first rail saw him ride away with a middling score. Going for a step up on run two and landing his switch back 12 followed by a solid frontside 1080 he then struggled with speed on the last jump and crashed. Carlos finished seventh in his heat just missing the top six cut off for semi-finals.

Competition continue tomorrow with the slopestyle semi-finals followed by finals  on Friday. 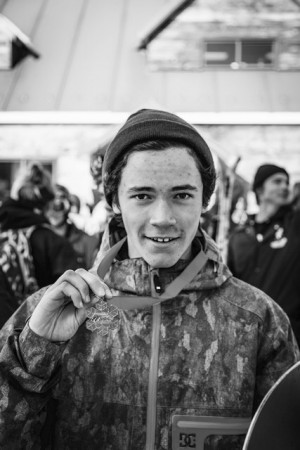