Spindleruv Mlyn, Czech Republic (31 March 2017) – New Zealand snowboarder, Tiarn Collins (Queenstown) has claimed a bronze medal at the Junior World Championship slopestyle in Spindleruv Mlyn in the Czech Republic. The penultimate event in a busy northern hemisphere season spent ticking off qualifying criteria for the 2018 Olympic Winter Games, Collins says, “It was such a good feeling to be standing back on a podium.”

After qualifying top in Thursday’s heats, Collins was able to fast track through to finals, rather than contesting semi-finals rounds. There the Kiwi faced stiff competition from US rider Chris Corning who won the final FIS World Cup slopestyle event of the season last Saturday at the same venue and came into Spindleruv Mlyn with silver in big air and bronze in slopestyle from the recent senior FIS Snowboard World Championships in Sierra Nevada (ESP).

Collins had to overcome nerves to put down a high scoring run on his second attempt in today’s finals.

“I was probably the most nervous I’ve ever been before my second run because I fell on my first,” he explains.

Putting a season’s worth of competition experience to good use, Collins pushed through with a technical rail line and landed a solid cab double 12 on the bottom jump for a score of 92.00 and the bronze medal.

Competition continues tomorrow with the men’s Big Air finals. After topping his qualifying heat on Wednesday Collins says he’s “super excited” about the final event of the season. 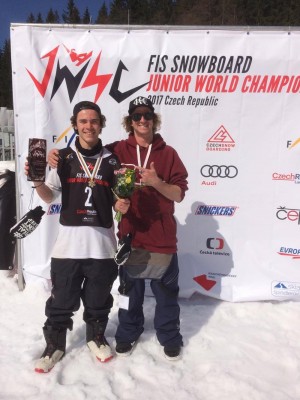