Copper Mountain, USA (11 December 2016) – The first stop of the U.S Ski and Snowboard Association’s Revolution Tour, held at Copper Mountain in Colorado over the weekend, provided a rewarding start to the season for NZ’s up and coming freeskiers. Finn Bilous (Wanaka) and brothers Nico and Miguel Porteous (Christchurch) competed in the 22-foot superpipe against a 50-strong field and all made it through to the final 12. Nico finished in fifth place, Miguel sixth and Finn 10th.

Established in 2004, the ‘Rev Tour’ is a premier series of progressive events for top junior riders and is designed as a stepping stone from grassroots to elite level competition. The Revolution Tour is an International Ski Federation (FIS)-sanctioned event and skiers also earn valuable Association of Freeskiing Professionals (AFP) points.

With Olympic silver medalist Mike Riddle (USA) and X Games bronze medallist Benoit Valentin (FRA) on the start list, the battle for the podium was always going to be a good one. Add in heavy snowfall during the competition and the challenges were really on. However, the NZ contingent were not to be deterred and pushed hard to make the final cut.

“It started snowing super hard for my heat which made the pipe really slow but I managed to land both qualifying runs,” explains Finn. “I landed a fairly stock run for me including both way cork 900s and a un-natural cork 1080 at the bottom. I was awarded an 83.50 which put me fourth in my heat. I went for the same run in finals but unfortunately fell on my last trick on both runs. I was disappointed but it still feels good to be back in the pipe and to start the competitive season.”

Top placed Kiwi, Nico Porteous says he was “happy with how the day went, as there were some big names ahead of me and the conditions were really tough.” 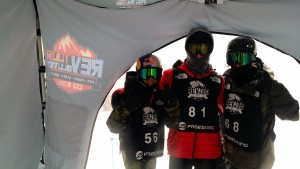