Utah, USA- (5 March 2014) – Skier Sam Smoothy has earned his second podium spot on the 2014 Freeride World Tour, taking out third place at the Snowbird Ski and Summer Resort stop today (Thursday 6 March NZT). The result comes off the back of his win last month in Austria which saw the Kiwi move into second place on overall tour rankings.

This fourth stop of The SWATCH FREERIDE WORLD TOUR BY THE NORTH FACE was originally scheduled to take place in Kirkwood, California on March 1; however event organizers determined snow conditions were not suitable for competition and the venue was changed to the Utah resort. The weather and snow conditions continued to provide challenge and competitors endured further delays following a large snow slide on the North Baldy competition venue. The Silver Fox face was then named as the new competition venue and with fresh snow underfoot the competition finally got underway.

Silver Fox has played host to many freeride competitions in the past. Its consistent pitch allows riders to open up the throttle and punctuate runs with a variety of features located on the face.

“The conditions were a little like NZ competition conditions due to a skied in firm base with only a skiff of fresh snow and I think that suited me,” explained Sam Smoothy after the competition.

Looking pumped from the start, Sam stomped a big air off the first cliff feature known as "Frenchie" rock and controlled his speed, linking several consecutive airs and making good and varied use of the terrain.

“I just wanted to try and link five fast airs with only five turns and I think I came close,” he explained of his strategy.

Countryman Neil Williman also looked like he wanted to make his mark on today’s competition as a follow up to his win at the three star Freeride World Qualifier event in Austria last month. Going for the same big air as Sam at the top of the course Neil was unable to hold on to the very difficult landing and lost both skis in the crash. He came away unhurt but disappointed.

Charlie Lyons was unable to compete in Snowbird having suffered a season-ending season a few days prior to competition. 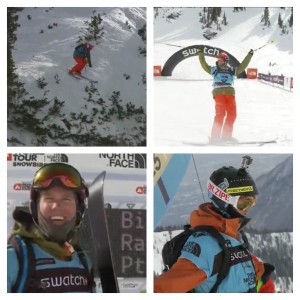