Things Got Crazy on Day 3 of Junior Nationals!

Lake Wanaka, New Zealand (9 October 2015) –Competitors in the Cardrona NZ Freeski & Snowboard Junior National Champs enjoyed fine spring conditions for their third day of competition today. The week-long event has attracted over 200 competitors aged five to 18 from throughout New Zealand as well as Australia and France. On today’s schedule were the Salomon Snowboard Halfpipe and K2 Ski Freeride.

Competitors each had two runs in the 22ft high Olympic pipe with judges looking for good control and amplitude, controlled landings and a variety of tricks.

“Every year we see the standard of halfpipe riding getting higher at Junior Nationals and this year in particular there were some outstanding performances,” said Head Judge Mike Hijgemann. “The young kids in particular really stood out, I thought they were amazing.”

In the Year 3-4 Boys’ age group Wanaka ridersCampbell Melville Ives and Rocco Jamieson had a friendly but determined battle for the top score, both throwing down technical tricks including back 3 alley-oops and front 3s and a backflip for Campbell on his last hit. Campbell took the win by a whisker showing slightly more control and amplitude.

Although “pretty nervous at the start” Campbell said the halfpipe is his favourite discipline because he likes “getting out there and having fun.”

Valentino Guseli (Australia) was a stand out in the year 5-6 boys’ group. Showing amplitude, control and variety of tricks, his first run earned the highest score of the competition with each judge awarding him 90 points out of a possible 100.

The older competitors (Years 7-13) pulled out some big manoeuvers right from the get go. In the Year 11-13 boys’ category Freeman Andrews (Tauranga) gained plenty of amplitude, allowing him to try for the more technical tricks. His first attempt at the haakon flip on run one didn’t come off but he went for it again on run two and landed, chalking up big points. First place was looking tantalisingly close before a revert on his last trick caused a deduction of points, the judges underlining the point that a clean landing is key.

Freeman would finish in second place behind US-turned-Kiwi rider Rakai Daniel Tait who also stepped up after a crash on his first run, showing consistency all the way down the pipe and stomping his run.

Wanaka’s Zoi Sadowski Synott (Yr 9-10 Girls) laid claim to her fourth gold medal for the week, finding the necessary amplitude to showcase her more technical tricks including a front 3, cab 3, front 5 on her last three hits.

The ski freeride competition took place on the Tulips run on the lower left side of Captain’s. Head Ski Judge Dion Newport reported “a great day, with kids across all age groups making good decision with their line choice and demonstrating some really outstanding skiing.”

Once again the younger skiers made sure they had the judges’ full attention. While his twin brother was hard at work in the snowboard halfpipe comp, Finley Melville Ives took charge of the ski freeride side of things, winning the boys’ year 3-4 age category with a charging second run and particularly enjoying “gapping down the rock drops and being creative”.

Gustav Legnavsky (Wanaka) “skied like an adult” despite his young age, the year 5-6 boys’ age group competitor impressing the judges with his strong skiing, arcing turns and total lack of hesitation. Newly crowned New Zealand Junior Freeride Tour Champion Harry Cookson (Hotorata) opened with one of the hardest lines and skied a super clean run for the win in year 7-8 boys. Ben Harrington (Wanaka) showed no hesitation with his big cliff hit, and skied a confident run top to bottom to win the year 9-10 boys’ age category.

Margaux Hackett (France) left little doubt that she is one of the strongest female competitors at this year’s Junior Nationals, claiming her third win for the week in year 11-13 girls with “beautiful skiing technique” and an all-round impressive performance.

Some “mostly friendly” sibling rivalry saw Queenstown’s Sophie and Livvie Thompson go one-two in year 9-10 girls. The ski racing sisters were “enjoying the fun of doing something different” by tackling today’s freeride competition.  Sophie came through as the winner, her run a little more fluid than her sister’s.

Putting an exclamation mark on the day was the showdown between Wanaka year 13 boys Craig Murray and Hank Bilous.

“It’s our last Junior Nationals so we thought we should send it,” explains Hank.  “We didn’t want to ski the same line so we worked it out beforehand,” adds Craig.

Having spent several years impressing Junior Nationals judges and spectators with their high paced runs and penchant for landing on their feet no matter how big the rock drop, the question on everyone’s mind was what will this pair do next. The answer was simple: go bigger and faster.

Craig came out in front with a massive cliff drop, tucked into a very technical high speed line.

Competition continues tomorrow (Saturday) with the Bonfire Snowboard Slopestyle and the U18 Open Ski and Snowboard Slopestyle. The week’s competition will conclude with a prize giving ceremony at the Lake Wanaka Centre, Ardmore Street, Wanaka at 5pm. Photos and footage will be shown of the Cardrona Junior Nationals event and the overall prizes will be awarded. 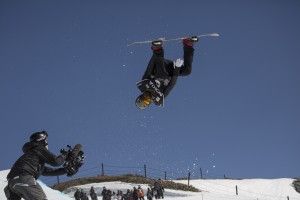