The North Face® Frontier Freeride World Qualifier took place at Queenstown’s The Remarkables ski area on Saturday 27 August 2016 with 50 of the world’s best freeride skiers and snowboarders throwing down in the Alta Chutes.

The event is part of a worldwide qualifying series for the prestigious Freeride World Tour and is sanctioned at four-star level, allowing competitors to earn maximum points. It is the first time in many years that a four-star event has been included on the New Zealand calendar.

“Today’s event showed why New Zealand is a real proving ground for athletes wanting to make it on to the pro tour,” said Head Judge, Dion Newport.

New Zealand’s Sam Lee (Wanaka) and Switzerland’s Elisabeth Gerritzen were the respective winners of the men’s and women’s ski category. Both athletes had successful Northern Hemisphere seasons which saw them make it through the ranks of the Freeride World Qualifying Tour and earn their spots on the Freeride World Tour for the first time. Aggressive, technical skiing on course today confirmed their talents and abilities.

Competitors had only one run to impress the judges on the steep exposed terrain and variable snow conditions in the chutes above Alta Lake. The judging criteria is broken down into air and style, fluidity, technique, line and control.

The female snowboarders were the first competitors to drop into the course. The USA’s Tess Carney rode an exposed line with brilliant control to land herself in first place. New Zealand’s Genevieve King, winner of The North Face Frontier two-star Freeride World Qualifier held at The Remarkables on Monday, also scored top points for her fluid line and finished in second. After crashing on the same line during the 2015 event, her goal today was “to come back and do it properly” and she was delighted to finish on the podium for the second time in one week. Australia’s Michaela Davis-Meehan rounded out the podium in third place.

Rupert Smith (NZ) claimed his second win of the week in men’s snowboard, backing up his winning performance in the two-star with a fast, clean and fluid run today for top points.

“I’m just happy to get a nice clean run through,” he said. “I did what I wanted which was to ride a good, fast run.”

Stephen Denmark (USA), a last minute competitor in today’s event, kept his emphasis on fluidity and made great use of the natural features on course to finish in second place in men’s snowboard. Sergei Diaz (ESP) was the third place finisher.

Despite a last minute change of mind on her line choice, Elisabeth Gerritzen put together a fearless performance, with strong, aggressive skiing right down the fall line and incorporating three airs for a convincing win in women’s ski.

“I started screaming halfway down, I was just way too excited!” she explained afterwards.

The men’s ski field took their standard no-holds barred approach to competition, hitting big features, dropping large cliffs and generally wowing spectators in their quest to reach the top spot of the podium.

18-year-old Konstantin Ottner (GER) “really wanted to do a backflip” but with the snow firm under foot and cloud coming in reducing visibility just before his run, he nearly decided against it. However, after watching his fellow competitors throw down and hungry for a top-three finish, the decision was made. “I just thought, let’s do this.” His daring manoeuvre off one of the rocks at the top of the course was one of the biggest moves of the day and enough to earn him second place.

Sam Lee (NZL) who finished in third place in 2014 and second place in 2015, finally hunted down his first place finish at The North Face Frontier today. Looking perfectly at home on a very familiar venue and explaining why he is nicknamed the ‘ibex’ (mountain goat) he headed straight for the exposed terrain. Sam managed to make perfect turns and catch solid airs on parts of the course where other competitors could only manage to sideslip and the judges awarded him top marks.

“I wasn’t expecting to win and I’m super-excited about this result,” he said. “I’ve been gradually making my way up the podium over the last few years to it’s awesome to win today.” 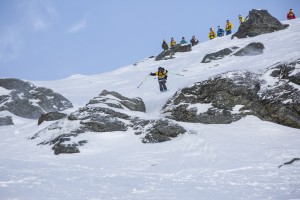