The countdown is on to a major highlight of the freeski calendar with only a few days to go until The North Face® Freeski Open of New Zealand Slopestyle and Halfpipe comps kick off at Cardrona Alpine Resort on 7 August.

Now into its 11th year, the event’s special formula combines top quality competition and a fun social atmosphere, with world-class athletes competing on the outstanding terrain lovingly maintained by the Cardrona Parks crew.

New Zealand athletes confirmed to compete at The Freeski Open of NZ Park and Pipe events include all four Wells brothers (Jossi, Byron, Beau-James and Jackson), bringing with them a host of top level results from the northern hemisphere season.

NZ’s own Janina Kuzma will also be one to watch in the halfpipe following her second place finish on the 2015 International Ski Federation (FIS) World Cup tour.

On form international athletes to keep an eye out for in slopestyle include Swiss and British Olympians Elias Ambuhl and James Woods and the USA’s Keri Herman.

The Slopestyle and Halfpipe are classified as silver level events by the Association of Freeskiing Professionals (AFP) and athletes will be looking to bag AFP World Tour points. Jossi Wells currently sits in second position on overall tour rankings behind Gus Kenworthy of the USA (not competing at Freeski Open of NZ).

The event schedule is:

Saturday’s slopestyle finals come with the promise of a spectacular show with competitors given three runs to throw down their finest performances and impress the judges.

The excitement continues on Sunday 9 August with Halfpipe qualifiers and finals running back to back in one intense day of competition. Be prepared to see boundaries pushed as the world’s best freeskiers battle for podium spots.

The North Face® Freeski Open of New Zealand is the only event in the world to stage Slopestyle, Halfpipe and Big Mountain events in one competition. The Big Mountain competition is scheduled for 1 – 6 September and we look forward to seeing more jaw-dropping freeride action with The Remarkables ski field providing equally stunning terrain. 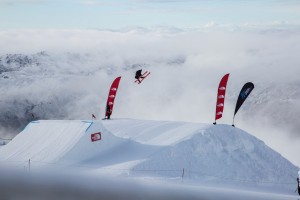