Queenstown, New Zealand (3 September 2015) – Qualifying rounds for The North Face® Freeski Open of New Zealand Big Mountain were held today in Shadow Basin at Queenstown’s The Remarkables Ski Area. With Freeride World Qualifier tour points available to snowboarders as well as skiers for the first time in the event’s 11 year history the start list boasted a strong international line up.

“I always say the Freeski Open of NZ is one of the highest level events on the Freeride World Qualifer Tour and everyone showed that today,” says Head Judge Dion Newport.  “Men’s freeski was the standout, those guys made our job extremely hard today!”

Competitors each had only one chance to put down their best run and earn a spot in the finals. Scores were awarded based on overall impression with specific focus on line choice, air, style, fluidity, control and technique. The top four female, top seven male snowboarders and top five female, top 17 male skiers progressed to final rounds.

While several old faces were amongst those making the cut for finals, judges were also ‘blown away’ by new talent. Kiwis Blake Marshall and Jack Harker were the top placed competitors in men’s ski. Jack scored 93.5 from a possible 100 points with his run which included a massive side air hit in the middle section of the course and finished off with an impressive double rock drop at the bottom of the course.

Starting in the second half of the field Blake Marshall was fully aware just how high the bar had already been set. “I was watching from up top and everyone was really throwing down.” He started out strong with a committed top section showing no hesitation in taking on the double rock drop, the largest of the day and earning an impressive 94.25 points.

Julian ‘Jamesa’ Hampton, one of the last skiers of the day, summed up the standard of competition. “When you’re the last rider to drop you need to mix it up a bit so you can separate yourself from the rest of the field. I was unsure of the top air, I hadn’t hit it before but I knew I needed something different so I took the risk.” His risk paid off, Jamesa also attacking the course for a score of 90.75 and his place in the finals.

Caite Zeliff was the standout performer amongst the female ski competitors, putting down a run which would have seen her at home in the men’s field and stomping her landing off the huge ‘Breakfast Rock’ feature for the top score of 88.25.

The snowboarders also impressed judges, particularly given the ‘dust on crust’ snow conditions which meant an unforgiving layer of hard packed ice and snow lay only a few centimetres below a fresh dusting of snow. “It’s much harder to land big airs and complete a long run out at the bottom of the course on a snowboard in these conditions,” explains Dion Newport. “But the snowboarders stepped up even higher than we expected and showed why it was a good call to invite them to compete at this year’s Freeski Open.

Australia’s Michaela Davis Meehan was the top snowboard competitor in the women’s field, demonstrating solid grabs and fluid riding. “She definitely had her stompy legs on today” according to the judges.

While in the men’s field, top qualifying spot went to USA’s Brain Stenerson who started out his run with well controlled turns up top and continued with a fast, fluid line right to the bottom of the course with creative use of the natural rock features.

The North Face® Freeski Open of New Zealand is the only event to stage Slopestyle, Halfpipe and Big Mountain competitions in one. The Slopestyle and Halfpipe disciplines were staged at Cardrona Alpine Resort in early August.

For further information and regular updates visit www.nzfreeskiopen.com and follow us on social media:

Image: Blake Marshall competing in the 2015 The North Face® Freeski Open of New Zealand Big Mountain at The Remarkables, 3 September 2015 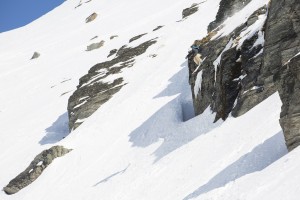