The NZJFT has had a hugely successful second year with three competitions held in a typically kiwi variety of snow and weather conditions. For 2016 GoPro have stepped up as the title sponsor, with Groovstar, Smith Optics, K2 Snowboards, Volk Skis and Snowsports NZ also helping keep the wheels greased for the crew and competitors. Like last year, competitors have had a chance to earn points on the Freeride Junior Tour.  In addition to earning points, some lucky riders received wildcards for the Freeride Junior World Championships held in Andorra in February 2017.

The first event of the season was held on Friday the 19th of August at The Remarkables - the freeride jewel in the crown of the Southern Lakes area. With a 60 strong field of young rippers, it was evident that the future of New Zealand free riding is strong. The day dawned crystal clear and warmed up enough to provide great conditions for a competition.

Once MC, ninjas and judges were in place the action kicked off with the Under 10 categories starting from the cat track in Shadow Basin. The kids were basking in the sun, showing some stunning skiing with very fluid and impressive moves. Ruby Dowsett-Smith took out the Under 10 Girls and Harper Souness defended his title from last year, wowing the judges with some very fast aggressive skiing that linked great features together.

The next age group (10 - 14) started their runs from the top of the ridge overlooking Lake Wakatipu. These were the biggest fields of the day, with 17 make skiers hungry for the title. Ben Harrington defended his 2015 title successfully, and Molly Thomson took out the girls’ event. Zephyr Lovelock styled his way to the top of the podium in the 10 - 14 Snowboard Males with a great show of fluidity and creativity. In the Under 15 girl snowboarders Cool Wakushima took the top spot over a comfortable Merla Stalker; both the girls showed excellent control and technique on their boards.

The 15 - 17 Ski Girls was a hard fought battle but Reanna Shepard-Cross took the top spot, closely followed by Emily Scott and Meghan Blackley. In the 15 -17 Snowboard category, 2015 champ Finn Duffy had Toby Murray nipping at his heels but put down an impressive run with a good mix of freestyle and technical riding to take the win.

The 15-17 year old male skiers waited patiently at the summit of Shadow Basin in the heat of the sun until it was their turn to drop. Some huge runs were thrown down. Finn Bilous took the title with an all time run linking a right 360 spin and a back flip followed up with a impressive air at the bottom. Manu Barnard and Alistair Garland were nipping on Finn’s heels with impressive runs both linking freestyle and great runs.

There were a number of strong contenders for the GoPro ‘Move of The Day’ award, but none came close to Bella Thomsson who skied a super aggressive and impressive line, unfortunately not quite managing to stick her last air but coming away with a brand new GoPro Session for her efforts.

All in all it was a successful day, with spring conditions, a light breeze and stunning sunshine. The competitors made intelligent choices and skied to the conditions, with no injuries obtained. As always, the juniors put on an impressive show. Many thanks to the sponsors, competitors, coaches, parents and organisers, and of course the patrol team at The Remarkables for their help and support on the day.

On Saturday the 3rd of September the second JFT event was held at Mount Olympus, one of the best club fields Canterbury has to offer. While the snowpack was less than ideal, a suitable venue was selected and the day dawned warm, calm and sunny. Two out of two bluebird comp days so far! Almost 40 riders made their way from all over New Zealand up to the club field, and it was great to see some of the local young Mt Olympus members getting involved.

While the crew waited for conditions to soften, the competitors got a chance to have a good look at the venue which provided a great taste of what Freeride Competitions are about - some blind take-offs and careful line selection to ensure both safety and fluidity, with a variety of snow conditions in the face.

This time the 15 - 17 Male Skiers kicked things off, with Finn Bilous again taking the win. In the relatively short venue he managed to link a number of features together to pull off an impressive run. Matthew Sweet took 2nd place with a clean 360 and Alister Garland came in 3rd with 3 fast and well executed airs.

All the 15 - 17 year old girls skied beautifully, with Megan Blackley taking the win this time. Finn Duffy again proved how much of a solid contender he is for the Freeride Junior World Championships with a solid run which put him back on top of the podium.

In the 10 - 14 Male Ski category, Luca Harrington linked together some solid airs to claim the win with a convincing score of 90. Only a few points behind him was Lachlan Powell, with Finn Powell taking 3rd. The girls in this age group also skied well, with Molly Thomsson just beating her sister Bella to win the category.

All categories performed well, but it was the Under 10 Male Skiers who really stole the show. With two runs the boys had the chance to push each other and improve their scores second time round. In his first run, Sam Hewitt hit the bottom air straight off the nose, stomping it and straight lining to the finish to be greeted by roars of appreciation from the crowd. In the second run all four competitors took that same line, each going bigger than the last. It was a tough call for the judges but in the end local Sam took the win with Aiden Fitzpatrick in 2nd and Ryan Coupe coming in in 3rd place. The girls also skied well in this category, with Ruby Hewitt coming first and Poppy Freeman second.

This time the GoPro ‘Move of The Day’ went to Lachie Woodman who just missed the 15 - 17 Male Ski podium with a beautiful double in the middle of his run.

By the time the competition was done the snow had softened nicely so both competitors and adults made the most of the spring conditions and lapped the tows until it was time for prize giving. The successful competitors walked away with their hand-made plaques and arm-loads of swag from the sponsors. Many thanks to all involved and in particular the crew at Mount Olympus for putting on such a great day. All who made it to the event will be looking forward to a return to this magical place next year.

The third and final stop of the GoPro New Zealand Junior Freeride Tour for 2016 was held on Friday the 23rd of September at Turoa, Mount Ruapehu. The day dawned sunny but with the weather forecast predicting rain for the entire weekend there was certainly a sense of urgency to get in while we could and get the event done! The same venue as last year, the ‘Thumb and Fingers’ was selected, providing the competitors with lots of different options and soft spring conditions.

The 15 - 17 year old male skiers got the ball rolling, waiting for breaks in the mist to take their runs. This category was filled with a number of heavy-hitters from the South Island, and with two wild cards for the Freeride Junior World Championships in Andorra next February on the line, the level was certainly high. Hugo Cameron made his first appearance on the podium for the season with a fluid third-place-winning run, and Finn Bilous came in second with two big airs to put him in first place overall for the series. But it was 15 year old Manu Barnard who took the title on the day, with a fast, creative line ending with an impressive double at the end of his run. The result put Manu in second place overall, earning him a wild card along with Finn for the championships in Europe.

Local girl Chloe McMillan took the win over Megan Blackley in the 15 - 17 year old female ski category, skiing with beautiful control in the variable conditions. The only under 10 competitor, Vincent Gerrard from Wanaka, skied well in the rain and deteriorating visibility to secure his spot as the overall champ for 2016, and then the clouds really rolled in, putting the competition on hold.

A tense couple of hours were spent attempting to dry off in the Giant Cafe and begging the fog to clear. The weather for the next few days was looking atrocious and with visibility down to less than 10 metres outside the cafe, the completion of the competition was looking very unlikely. A few in-the-know locals suggested that we wait it out for as long as possible, ‘cause you never know what will happen at Ruapehu! And sure enough, at 1.30 pm the fog lifted and we could see the venue again! Competitors, coaches, judges and parents were suddenly running out the door to get the show back on, it was chaos!

With all involved back in position, the 11 - 14 year old male skiers kicked things off again. Although there were plenty of short course holds as the cloud came and went, and rain showers kept everybody damp, all the competitors managed to ski their runs well with very few mistakes made. The standard was high, with a lot of the competitors hitting the big drop at the bottom of the face. Mount Olympus regular Harry Cookson took the win, and local North Island brothers Fynn and Lachlan Powell battled it out for 2nd and 3rd respectively.

Having waited at the top of the venue for a huge amount of the day with smiles on their faces, the 11 - 14 year old female skiers finally got their turn, and turned out to be the stand out category of the day. Ruapehu ripper Jessie Violet came out of the gate charging and lined up a big drop in the first section of the venue. Unfortunately she wasn’t able to take it to her feet, but scored herself a GoPro for ‘Move of the Day’ with her aggressive, solid style. Lola Crump, another North Island skier, came in third behind Bella and Molly Thomsson. The sisters have been battling it out for the title all season, and this time it was Bella who came out on top, skiing fast and stomping three impressive airs to take the win convincingly.

Patiently waiting in the rain for their runs, the snowboarders were the last category of the day. With visibility again deteriorating, the boys rode well in the wet conditions. James Thompson took third, with Timo Fitzpatrick keeping his run fluid to take second place. Finn Duffy showed great control both in the air and on snow to take his third consecutive win and secure his wild card for the Freeride Junior World Championships.

With the rain setting in the competition was packed up quickly with parents and riders all chipping in to get the job done. A challenging run to the base buildings through the fog and rain got everyone off the mountain safely and in to the cafe to dry off and enjoy prize giving. A huge swag of prizes were given out, thanks to sponsors GoPro, Smith, K2 Snowboards, and Volkl Skis, and all who made the podium were lucky enough to receive a pair of iDance Headphones.

Although the mountain threw as many weather-related challenges as possible at the event organisers, the day was a great success and everyone involved left happy and excited for next year. A huge, huge thank you to the army of parents and volunteers who persevered in the rain to make the event happen. Thanks also to the helpful crew at Turoa for their support. Although wet and foggy, it was a fantastic end to the NZJFT season. 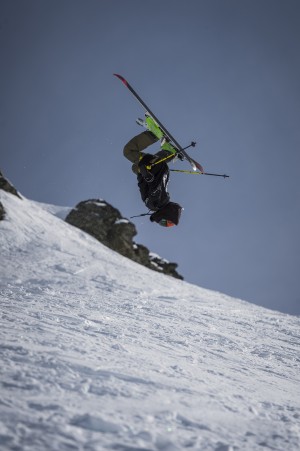