The Action Continues at Junior Nationals on Day Two

New Zealand Paralympian Carl Murphy was happy to get proceedings underway on the Speed Zone Gravity-Cross track this morning, acting as course forerunner and providing some inspiration for our up and coming athletes.

Following the same format as the ski competitors yesterday, racers first completed a single time trial before being ranked into elimination rounds and then taking on the nerve wracking prospect of racing head to head. Some spectacular high speed crashes added to the action packed day with competitors describing the event as both ‘terrifying’ and ‘fun’.

Fastest racer of the day was Junior boys’ Duncan Campbell who represented New Zealand in men’s snowboard cross at the 2014 FIS Freeski and Snowboard Junior World Championships in Italy earlier this year.

“It’s been a great day here at Cardrona and it’s always good to do well on your home mountain,” commented Duncan.

The Smith freeski slopestyle competition was split across three venues: Lil Bucks, Antler Alley and Big Bucks Park, according to age of the competitors.

The Shredder boys’ age group saw some of the most intense competition of the day and a hard fought battle for podium positions. Nico Porteous came out as the clear winner but the judges had their work cut out to separate second, third and fourth place. The final decision came down to Jed Ebsworth second, Jasper Klein third, Fraser McClellan fourth.

Nico Porteous’ run was so impressive that one of the judges gave him a near perfect score of 97 out of a possible 100. “I’m really ‘stoked’ with my run,” he said. “Junior Nationals is a great event to finish the season with and Cardrona have done a really good job with building the park.”

Maggie Little was the stand out performer in Shredder girls achieving her competition goal “to pull together everything I’ve been learning over this season, show the judges what I’ve got and put down a clean run.”

Finn Bilous appeared to cruise through his runs in the Youth boys’ group, making it look easy to come away 16 points ahead of the rest of the field. While in Junior boys Jackson Wells made it three from three adding a win in Slopestyle to his top finishes in the Ski Dual Giant Slalom and Salomon Skier-Cross.

Image: Finn Bilous in action in the Smith Ski Slopestyle 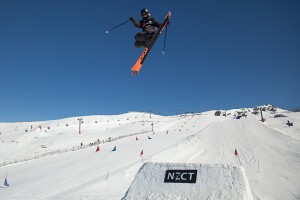