Lake Wanaka, Friday 28 August: Team Wells was crowned victorious at the Obsidian 2020 on Friday 28 August after a tight race which came down to the wire. After five challenges Team Wells snatched the win by only 20 points ahead of their rivals Team Kuzma and Team Smoothy, who were tied on 500 points each on the overall leaderboard.

The Obsidian rules state if there is a tie with the overall results then the countback will be taken from the Obsidian Overall Edit results. Team Kuzma and Jase Hancox Film took the top spot on the Edit Podium with their 7-minute epic movie featuring The Remarkables and Mother Nature herself. This art-house film won the hearts of the media panel with its expansive cinematography and crafted narrative. This win meant Team Kuzma seized second place overall in the Obsidian, narrowly beating an extremely competitive Team Smoothy.

Throughout the ten-day weather window and the five sports and videography challenges, the 3 teams have been evenly matched.

“I was so excited to be part of this event to ski all the different disciplines and then to get hurt. The whole uncomfortable theme rang true,” said an animated Jossi Wells.

The Freeski legend had to lead his team from the sidelines for the event when he broke his wrist on the first challenge of the Big Air. “From the very beginning I worked super hard with Tim Pierce from Two Bearded Men on the concept of the overall video and we landed on the Comfortable theme. Then we jump into the first day of competition and I get smoked. And it is ironic as the day before I am talking about pushing beyond the comfort zone and then I brake my wrist and suffer the consequences of what it is to do this sport.”

“This format is really new and to bring all these disciplines to one event I don’t think has been done before. And to see the competitive nature come out in every one in their retrospective fields was really amazing. Even coming to the filmers. Seeing the filmers getting super competitive with each other is a whole new thing.”

Overall second-placed Team Kuzma were delighted with their performance, “I was stoked to pick Jase Hancox film and Remarkables as my Mountain Shred venue. It was awesome being able to showcase my team and the mountain with such awesome videographers,” said Janina Kuzma. “Winter Games NZ Obsidian was truly a world-class event and we all loved being part of it. Seeing New Zealand showcasing such amazing talent across all of these disciplines was what it was all about.”

Team Smoothy led overall from the second challenge through to the very final event, showing exactly how close and competitive the 21 athletes and 9 videographers were. Team Smoothy’s Overall Edit created by the talented Queenstown Production House Diaries Downunder played up on Smoothy’s funny side and tongue in cheek attitude, with his teammates shining on the screen. “I am super happy with the team and we had so much fun and pushed our riding. It was just an amazing experience,” said an excited Smoothy.

Winning Videographer Jase Hancox summed up the Obsidian from a content perspective, “It is never one person who makes a film. There is such an army of people and that is true across the board for all teams.”

The Most Valuable Athletes (MVAs) from the Obsidian were also celebrated with Tiarn Collins coming out on top for the Men’s Snowboard category. He won at the Park Jam and came second at the Big Air and Freeride events showing consistency across the board despite never competing in a Freeride competition before. Zoi Sadowski-Synnott dominated the women's field with a win in the Park Jam, second at the Freeride and third at the Big Air, again never having competed in freeride event and taking it on with confidence. Finn Bilous was crowned top men’s skier showing his multitalented style and creativity across all the disciplines with a top spot on the Park Jam, second-placed Freeride run and third at the Big Air.

For the full story of the event, amazing content from all the challenges, plus behind the scenes panel discussions, we are producing a four-part series being aired on Sky Sports NZ in September. It will be available globally with the schedule and broadcasters being announced on the Winter Games NZ website.

For the full story of the event, amazing content from all the challenges, plus behind the scenes panel discussions, Winter Games NZ are producing a four-part series being aired on Sky Sports NZ in September. It will be available globally with the schedule and broadcasters being announced on the Winter Games NZ website. 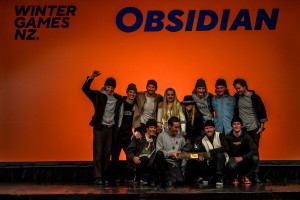