Early season FIS points were up for grabs on a gorgeous morning in the Southern Alps as 22 athletes representing Australia, Korea and the USA lined up for the initial qualifying heats.

Two-time US Winter Olympian Andrew Newell qualified fastest among the men and maintained that form through the finals to take the eventual win. His teammate Ben Saxton was third on the podium with Hwang Jun Ho of Korea finishing second to split the two Americans.
A US clean sweep in the women’s race saw Ida Sargent from Vermont take the win ahead of Jessie Diggins, winner of last weekend’s Merino Muster 42km Worldloppet marathon, with fellow Winter Olympian Sophie Caldwell third.

Katerina Paul from Australia was the only non-American in the six-woman ‘A’ final, described her achievement as “a proud moment”.

US Cross-Country Ski Team head coach Chris Grover said it had been beneficial having a competitive race as part of their New Zealand training camp.

“We love coming down here and getting to race at Snow Farm. The timing worked out really well this year because normally we’d be running our own time trials so when a race gets organised and we get to participate in it that’s great,” he said.

“It was really nice to have the Korean team here so we had some solid competition. It was beautiful weather, beautiful tracks and everyone went out there and had a hard effort so we’re really satisfied.”
Full results will be posted on the event page of the Snow Farm website at www.snowfarmnz.com and at www.fis-ski.com.

Racing continues tomorrow (Saturday) with the FIS ANC Women’s 10km and Men’s 15km Classic Mass Start at 9.30am, followed by the New Zealand National Championship for all age groups in the same event at 1.00pm.

Entry for the national championships is at Snow Farm on the morning of the race. Anyone wanting more information on age group categories and entry fees should visit the Snow Farm website. 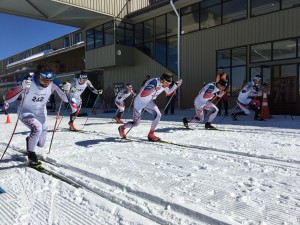