Racing was delayed by two days due to timing issues and weather with rain and fog causing poor visibility. When racing finally got underway on day three, slalom and GS races had to be held on the same day.

“We ran a very foggy slalom in the morning which got the gears running but with a break in the weather and a lot of volunteer coursework they set the GS up straight after the slalom,” explains Tai.

“First run I just stuck to my game plan, clean on the flats and aggressive on the pitch but a few bobbles had me just outside the lead spot. For the second run I thought to clean up a few areas but stick with the same plan and I should be in the money. My main competitor has a very strong Icelandic record and put on a really close race.”

Tai came in 0.07 seconds ahead of Einar Kristinn Kristgeirsson of Iceland in the GS and he placed sixth in Slalom.

“I am just happy to snag the win as the last chance I had to win (at the Mammoth Mountain GS) I straddled the last gate through the finish and have had quite a bitter taste in my mouth ever since.”

Tai is in Iceland with the Colorado Mountain College Ski Team and has another series of races coming up in Akureyri, Iceland. 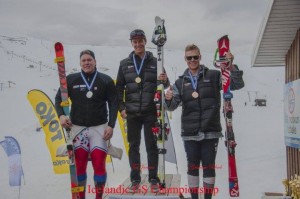