Switzerland, Russia and Austria in the Spotlight at the Audi quattro Winter Games NZ Women’s Giant Slalom at Coronet Peak

The 73-strong field was the largest women’s field seen at a Continental Cup in New Zealand for at least ten years, according to Chairman of the FIS Australia New Zealand Cup Committee David Howden.

“We had top ranked athletes here representing 16 different nations and you would be hard pressed to see another field of this calibre. It is an indication that the athletes and their coaches are focused on the Sochi Olympics and the Winter Games ANC event offered a chance for many of them to make some good results.”

Howden was impressed with the work of the Coronet Peak race crew who managed to put together a course in extremely challenging conditions just as they had done for the men’s giant slalom event on Monday (August 19).

“When we checked the course early this morning it was misty, and the bottom section was softening up due to warm temperatures, but the crew worked hard to make it happen and the course held up well for the two runs.”

"It's nice to be here in New Zealand. I trained hard, and now I had a race,” Holdener said. “The first was not so good, the second better, and I'm happy now to win this race. It’s a good feeling, the race was very tough, very bumpy.”

Positions changed in the second run with leader Scheyer, who is ranked 114, putting in a slower run of 56.55, which moved her into third place overall in a time of 1.51.43.

Scheyer is a member of the Austrian women’s team and was happy with her performance overall. “I would like to win of course but this has been a good race for me.”

Romanavo, 19, is ranked 123 in the world and was placed fourth after the first run but a good second run gave her a combined time of 1.51.30 and a claim on the silver medal. She said it is an important result for her on the road to the Sochi Olympics in 2014.

“This is the first race of this level that I have reached the podium and it is good for me.”

Following the second run McJames was bumped into fourth place by a few splits scoring a combined time of 1.51.45.

She said it was a close run race: “I was sorry not to make the podium but I am happy to have a good result in summer.”

Fifty racers finished the course and first New Zealander was national representative, 17-year-old Piera Hudson, who started in bib 55 and finished 33rd in 1.56.64. She is ranked 661 in giant slalom, but is sub-300 in the world in Super G, on a ranking of 297.

“I was disappointed as I had hoped to make the top 30 in the first run but it didn’t happen today,” she said. 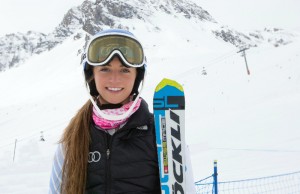