Men’s qualifying rounds were first on the day’s agenda with 23 skiers eager to put down clean runs and earn a spot in the finals. Lyman Currier was the stand-out performer leading the field with a score of 95.75. The top eight qualifiers would join six invited riders to contest the podium.

Up next came the women’s competition and with a field of only 15 riders, the decision was made to go straight to a three-run final. Anais Caradeux was the second rider to drop into the pipe, crashing on the first run.

“I hit my head and knocked the wind out of myself,” explained the French rider. “On the second run I felt a little shaky so decided to take the amplitude down a notch and I felt good after that.”

Good enough, indeed, to take out the win. Caradeux is currently ranked third in the world for halfpipe by the Association of Freeskiing Professionals (AFP). Her winning run today featured a left 900, alley oop five to mute, alley oop mute, left 540 tail grab, right 540 to left 720.

Close behind Caradeux was Angeli Vanlaanen from USA with a score of 89.75, backing up her recent second place finish at the Audi quattro Winter Games halfpipe world cup. Great Britain’s Rowan Cheshire finished in third place with a score of 88.50.

“It was good to watch the top five women going big and putting down some good runs,” commented head judge Greg Tuscher.

With temperatures warming up, the key to the day’s success was to move through competition as fast as possible to ensure snow conditions remained stable in the halfpipe. Following hot on the heels of the women’s final, the 14 male finalists were eager to get their two finals runs underway.

Competition was fierce, with skiers making the most of the fast conditions to throw down new tricks and gain huge amplitude. New Zealand’s Lyndon Sheehan received a cheer from his home crowd when he landed his double cork 12 for the first time in competition.

Beau-James Wells looked suitably stunned at the end of his second run claiming, “I’ve never felt like this before,” after landing his unnatural left double nine, also for the first time in competition. The last minute decision to throw in the new trick paid off for Wells, earning him the second place finishing spot with a score of 89.50.

However, it was Lyman Currier’s performance which really wowed the judges, his run beginning with a switch left 720 Japan to alley oop flat 540 mute, left dub 12 mute, right 900 opposite mute, 540 Japan and finishing with a flat 720 mute.

“I’ve been feeling it since this morning,” enthused Currier. “It’s a perfect day and I’m extremely happy with the way I skied.”

The USA’s Alexander Ferreira finished in third place declaring himself “so happy” and thanking “New Zealand for putting on the best competitions.” His trick of the day was a left double cork 1260.

The North Face® Freeski Open is classified as a silver level event by the AFP (Association of Freeskiing Professionals) World Tour and a 3-star Freeride World Qualifying event. It is the only event in the world to hold Slopestyle, Halfpipe and Big Mountain competitions in one.

Competition continues next week with the Big Mountain. Two fine weather days will be picked between the 2nd and 6th of September for the qualifiers at either The Remarkables or Treble Cone depending on snow and weather conditions.

Videos will be available to view throughout the competition at the following link: http://vimeo.com/thenorthfaceaunz 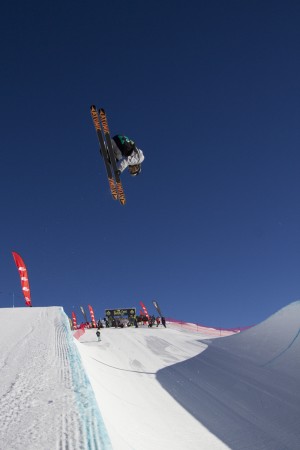