Kappl-Paznaun, Austria - (23 February 2014) – For the second weekend running New Zealand freeskier Neil Williman has claimed a podium position on the Freeride World Qualifier (FWQ) Tour. He placed second at the Open Faces FWQ two star event in Austria and was also awarded for best trick with an impressive backflip.

“Two stomped runs and twice on the podium in as many weekends, stoked,” he commented after the event.

The busy FWQ schedule also saw another Kiwi in action this weekend with skier Sam Lee competing in the El Dorado four star event in Andorra.

Sam put together a strong qualifying run placing him in eighth position and making him one of the nine skiers to go through to finals. Finals day didn’t go to plan, however, and the New Zealander only just avoided falling from a cliff and incurring serious injury. A misjudged manoeuvre coming out of a straight line chute caused him to crash near the top of the run.

“I managed to direct myself away from the cliff mid roll, but it was a close thing,” he explained.

Lucky to come away with only a few scratches and disappointed not to complete his full run, Sam said he was still “really stoked on making the finals” and “really happy to finish in ninth overall.”

Sam will now return to his base in Verbier, Switzerland to prepare himself for the next FWQ competition in nearby Nendaz from 14 – 16 March.

Neil Williman will next compete on 1 March as the Freeride World Tour moves to Snowbird resort in Utah, USA for its next stop.

Official results from both FWQ competitions will be available soon at: http://www.freerideworldtour.com/events

Image: Sam Lee takes a helicopter ride to the start of the El Dorado 4* Final 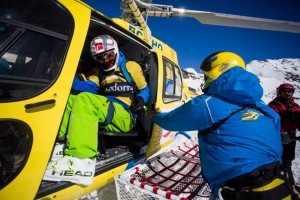