Sochi, Russia- (15 February 2014 ) –  Ben Sandford’s strong driving ability ensured him a spot in the final of the men’s skeleton at the Sochi Olympic Games to finish in 20th place.

Coming into the four-race series in 26th place the three time Olympian finished as the highest mover in the field, gaining six places and a combined time of 3.51.21.

While improving on his rankings during competition Sandford had nonetheless been aiming for a top ten place, The Rotorua based athlete had struggled to fully recover from a training crash during the final weeks of Olympic qualification and, while driving strongly on the seventeen-curve course, was unable to gain crucial time lost in the push to achieve his goal.

Sanford had placed inside the top ten on the same course at the Olympic test event in 2013t.

“Push time has a direct correlation to down time,” explained WPP Performance Programme Director Ashley Light. “Ben is an exceptional driver but was unable to make up for his slower starts.”

“It was unfortunate that his lack of complete recovery didn’t let him push at the competitive end of the field but to be able to get inside that top 20 is testament to his fortitude, experience and determination.”

Coach Terry Holland was pleased with Sandford’s performance in tough circumstances. “He was solid, he had progressively better pushes so he wrapped this up in good style. He’s had a long and respected career in this sport and he did himself proud.”

Sandford himself expressed disappointment at the end of his Sochi campaign today. “It’s incredibly frustrating to make it into the top 20 but not be able to do better,” he said. “

Sandford will now spend time with his family in Sochi. “I haven’t seen them yet so I’m really looking forward to catching up with them and then spending some time fully recuperating.”

Shane Dobbin has completed his last hard training before his favoured 10,000m race kicks off in the early hours of 19 Feb (NZT).

Aiming for a top 8 finish, Dobbin’s coach and brother Kalon Dobbin said overnight that the long track speed skater was in good shape.

“He’s feeling good within himself and today delivered 3 x 6 laps at full race speed. He wants to work on his timing and weight distribution but everything is on track for him to deliver the race he’s preparing for.”

The competition within long track speed skating has been dominated by the Dutch and competition is expected to be tough.

The skater has a rest day tomorrow and will spend time enjoying the warm Sochi weather before final race preparation on the track on Wednesday.

Dobbin finished in fourteenth in men’s 5,000m on February 8th, an event the athlete considered a warm-up to this week’s 10,000m.

Elsewhere in the Team

The freeski halfpipe team are back in the pipe overnight tonight, taking part in the second of three training runs.

Byron Wells is still resting his leg after a crash in training earlier in the week and will confirm his training schedule this evening. The physio team are working with him and monitoring his progress as competition day approaches.

There are still three more days before freeski halfpipe begins in the early hours of 19 February.

Alpine skier Adam Barwood has a gym session today and a technical inspection of his skis and boots tomorrow to ensure his equipment complies with Olympic regulations. 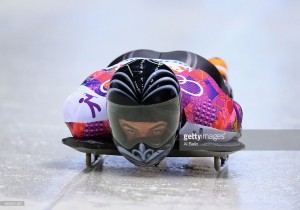