The final races in the Junior Interfields Southern Series were held at Treble Cone Ski Area on Sunday 14 September. Racers in U8 – U16 age categories contested two runs of the Giant Slalom course to decide the overall winners of the four race series which has been run at Coronet Peak, Cardrona and Treble Cone.

Overnight snowfalls kept the racecourse in good condition for the 80 athletes all eager to put down their fastest runs and finish the race series on a high.

Connor Kennedy and Cameron-Leigh Murphy were the day’s fastest racers in the U16 age group, both finishing the Southern Series in second place overall. Cardrona Alpine Ski Team members Ben Richards and Eden Mckay were the U16 overall winners. Eden placed first in all three races she attended (Coronet Peak 19 July, Cardrona 27 July, Coronet Peak 7 September). She puts her strong results down to “commitment, training and focus.”

“The NZ race season has been going well; I have had good races and tried to do my best,” she commented.” Her focus now turns to the National Youth Series finals scheduled for 26-28 September at Cardrona Alpine Resort.

In the U14 age category Julius Staufenberg (CAST) and Alice Robinson (Queenstown Alpine Ski Team) rounded out a perfect race series, each taking the win on the Treble Cone course to claim the overall U14 men’s and women’s titles.

“I had some really good results in North America in February and March and was hoping to carry some good form to this year’s New Zealand race season,” explains Alice. She also now turns her attention to training for the Cardrona Youth Series Finals.

“I have been very lucky with all aspects of coaching and training this season," said Alice. "At Coronet Peak we have had awesome training and great support from NZSki. We have a great coaching line up at QAST who have been very motivating for me and my team mates in both race and training. We were also very lucky that Snow Sports NZ and Snowvision put on a couple of Junior development camps with World Cup coach Chris Knight and Ian McLean.”

The U12 men’s age group saw a tight tussle for final standings with QAST racers Cameron Marshall and Sam Hadley and CAST’s Leo Staufenberg all in the running for the top spot. Sam Hadley would make the best of the steep Treble Cone course, posting the fastest time for the day and taking out the overall title. Leo placed second in the TC race for third overall with Cameron third fastest of the day but with enough points to place second overall.

In U12 girls Evie Brown was another clear winner with three race victories under her belt including the win at Treble Cone.

U10 racing has also seen close results throughout the Southern Interfields series with Gustav Legnavsky (CAST) and Samuel Packer (CAST) sharing top overall spot in the men’s group and Holly Skinner (Ohau) and Mikayla Smyth (QAST) in the women’s group. Gustav and Mikayla were the winners of the Treble Cone races.

Overall winners of the U8 age group were Mathilda Watterson (CAST) and Toby Jackson (TC).

The day finished with a prizegiving hosted by Cow Lane bars and café in Wanaka. They provided a free barbecue while representatives from Wanaka Ski and Snowsports Club handed out all the medals and awards.

“It was a great day for the last race and final get together for the young ones,” said Grant Winsloe. 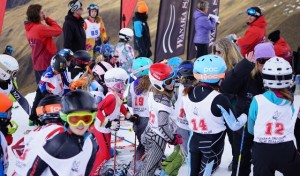