A small but quality New Zealand team dripping with podium potential are poised to open their account at the Sochi 2014 Paralympic Winter Games which officially bursts into action in Russia tomorrow (Saturday).

Adam is joined on the New Zealand team by Paralympic debutants Carl Murphy - one of the leading para snowboard cross standing riders in the world – and sit-skier Corey Peters, whose busy schedule will see him compete across four events.

Expectations are high that the well prepared trio can secure two medals and go one better than the Vancouver 2010 Paralympics when Adam memorably struck gold in the slalom despite taking a mid-race tumble in his second run.

Dunedin-born Adam, who is now based in Wanaka, will be the first Kiwi in action in Sochi competing in the men’s super-G standing on Sunday.

Adam, 26, will then compete in the super combined event – which takes place across Tuesday and Wednesday 11 – 12 March - before concluding his competitive programme in Sochi with the defence of his slalom title on Friday 14 March.

In fact, the South Islander, who was born with spina bifida, believes the quality of his opposition is at an all-time high.

“I don’t think we’ll see what we saw in Vancouver (where Adam held such a buffer after the first leg he could even fall in the second leg and get back to his feet to win gold),” explains Adam. “Many of the competitions are being decided by hundredths of second - that’s what keeps it really exciting.

“We have an opportunity (to perform at the Paralympic Games) every four years and get a chance to put in our best performance and represent our country,”

“Right now, I’m focusing on the process of that then the results will follow. If I do, I‘ll be rewarded with a podium spot.”

Carl, a below the knee amputee, is also hopeful he can flourish when he competes in the para snowboard cross, a sport which makes its Paralympic debut in Sochi. Currently ranked joint third in the world he sees his strongest challenge coming from the leading US trio of Evan Strong, Keith Gabel and Michael Shea.

“The three Americans and I have been battling for those podium positions over the past couple of seasons and we'll all be jostling for that one spot,” adds Carl, whose preparations were dealt a blow when he suffered a knee fracture in a training accident in December.

Nonetheless, the New Plymouth born Lake Hawea resident, who was ranked No.1 in the world before his injury, believes top spot on the podium is a possibility when he competes on Friday March 14.

“My eyes are still firmly on gold,” he adds. “That is what I’ve been pushing for the last 18 months.”

Corey, who was paralysed after a motocross accident five years ago, opens his busy schedule on Sunday in the super-G before competing in the super combined on Tuesday-Wednesday 11 - 12 March.

He then switches his focus on to the slalom on Friday 14 March before he concludes his demanding schedule with the giant slalom, where he is world ranked No.11, on Saturday 15 March.

Only taking up the sport in 2010, the sit-skier, who hails from New Plymouth but now lives in Wanaka, has enjoyed a meteoric rise and a positive run of recent results has led to a re-setting of his goals.

“I’ve always said a top ten in each event would be awesome,” says Corey, 30, whose preferred events are the giant slalom and super-G. “But after the last few World Cup events and the fact my times have improved - a top five or six spot is achievable. If I was to do that it would be pretty awesome, considering I'm a newbie at my first Games.”

The three-strong team are currently based in the Athletes’ Village in preparation for competition and Adam has settled in quickly to his new environment.

“My first impression is that the Village is going to be a great place to live,” he explains. “All the facilities, transport etc are close to our ‘Kiwi zone’ and the guys have done a great job making our space feel like home,” he explains.

The Chef de Mission of the New Zealand team, Ashley Light, says the athletes are raring to go.

“The mood in the camp is one of excitement,” says Ashley. “The athletes have high expectations of themselves and in turn so do the support staff and coaches. The Village is extraordinary. We have no real issues, friendly staff and a can do attitude. We are looking forward to competing. It’s what we do best.” 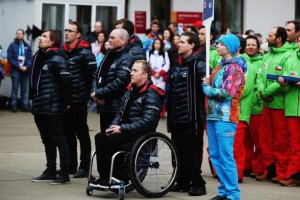