Summer is in full swing here in New Zealand but for those focusing on a future in competitive snowboarding, winter is where it’s at right now. Ronan Thompson, Fletcher Craig, Lachlan Blackmore, Tiarn Collins, Mitchell Davern and Zoi Synnott are in Breckenridge, Colorado participating in a Snow Sports NZ Talent Development Camp with two-time Olympian Mitch Brown as lead coach.

“The camp is focused on identifying and developing a group of young talented riders aged around 12 – 15 years,” explains Snow Sports NZ Director of Coach and Sport Development, Adam Dooney. “The riders were chosen based on their performance and attitude from the NZ season during training, competitions and Snow Sports NZ camps.

“These riders have the potential to represent New Zealand in the future and this camp will give them a great introduction into training and competing internationally while still maintaining a quality Kiwi environment. The participants do have to cover their own travel and living costs so coming on camp represents a big personal commitment. We’re excited to be working in partnership with these talented young riders and supporting them on the development pathway.”

Two weeks into the six week camp and things are going well.

It’s an experience unlike anything the participants have gained before and they’re making the most of every opportunity to learn and progress in the sport.

“What I’ve enjoyed most so far is being in Colorado, a place with snow everywhere, being able to snowboard in different and bigger parks has been so cool,” explains Ronan. “Breck’s pipe has been so good as well, training at Woodward and getting to know everyone better and training and living with them.”

“I love training with Mitch he's such an amazing coach and knows exactly when to push us and he has a great energy,” says Fletcher. “For me the most valuable part of the camp has been being able to build my skills after spring camp and really nail new tricks I learned.”

Lachie adds, “Woodward has so many things to do that can help toward our training. We have also gone to the recreation centre which has a swimming pool and gym.  I think the most valuable aspect of the camp is to be setup at Breck with so many parks available, it really helps with progression and perfecting my tricks.  It gives me confidence to try new tricks as well.”

And Tiarn: “One of the most valuable aspects on camp has been making sure that our basics are perfect early season so later on we don't need to worry about them. My plan for the rest of the season is to learn as many tricks as possible and make my comp runs better. I'm also planning to do as many comps as I can!”

Focus will turn to competition this weekend as the riders concentrate on putting down some high level runs at the Rocky Mountain Series Snowboard Slopestyle at Copper Mountain on Saturday and the Snowboard Halfpipe in Breckenridge on Sunday. We look forward to sharing their news.

Snow Sports NZ will also look to organise a similar Talent Identification Camp in Colorado for freeskiers next January. 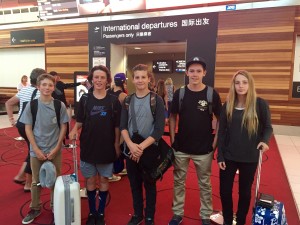