An overnight fall of 10cm of fresh spring snow heightened the competitive spirit and enthusiasm on day one of the 2012 Snow Sports NZ Junior Ski and Snowboard National Championships at Cardrona Alpine Resort today.

The Junior Nationals will run over four days from Monday 1 October to Thursday 4 October with Friday set aside as a weather day if required. The event has gained a reputation as an end-of-season opportunity to showcase New Zealand’s top junior riders and the action on day one certainly didn’t disappoint.

Today’s schedule included three events for competitors aged from 5 to 18 years old. Events included the Calci Yum Ski Dual Giant Slalom, Salomon Ski-cross and Smith Snowboard Slopestyle. Unfortunately the Ruggies (5 – 7 years), Grommets (8 – 9 years) and Ripper Girls (10 – 11 years) classes in the Smith Snowboard Slopestyle had to be postponed until Tuesday due to drifting in the snow flattening the course out in the Westons Terrain Park.

Some of New Zealand’s top junior races were on form today in the Calci Yum Ski Dual Giant Slalom. In an impressive display of the technical skill and aggression required for this high speed sport Sam Andrews took out the top honours in the Junior Boys and Elle Crisp for Junior Girls.

In the Youth division Jodie Llewellyn claimed first place for the girls and Conrad Barry for the boys.

The action was also fast and furious in the Salomon Ski-cross on a challenging course which showed many similarities to the World Cup development camp course used earlier in the month. The start was particularly exciting with a rhythm section of rollers and it was here that the race was likely to be won.

The event favours the most agile of skiers and typically sees freeskiers with a ski racing background on the podium. Few were surprised therefore to see Beau-James Wells take out the Junior Boys’ and younger brother Jackson claim first place in the Youth division. Jackson commented that The Junior Nationals “are always an event to look forward to and a great way to finish the season”.

Elle Crisp was the standout performer for the girls, taking first place in the Junior category with Olivia Jones the fastest amongst Youth Girls’.

Racing was fast and furious amongst all age categories with winner of the Ruggies division, Gustav Legnavsky, confirmed that the racing had been “super fun”.

Click here for full results from the Salomon Ski-cross

The Smith Snowboard Slopestyle was a huge success despite the decision being made to postpone younger riders until tomorrow. The Youth and Junior riders took on the full length of Cardrona’s Heavy Metal Park on a similar course to the one used for the Burton Open in past years. The creatively built slopestyle course featured a good balance of rails and jumps and a choice of two take-offs for each table.

Judges were excited by the standard of riding. Winner of the Junior Boys’ category, Joss McAlpin, impressed judges with a front side 360 with a tap. His winning run also included a cab five indy off the first jump, followed by a front side seven melon into a backside seven mute.

Naomi Macfarlane was the deserved winner of the Junior Girls’ top podium spot. Her run started with a tail tap followed by a fifty fifty to a backside boardslide and a nose grab off both the first and second jumps.

Head Judge Mike Hygemann commented that the female competitors were particularly inspiring at today’s Smith Snowboard Slopestyle. In particular he identified Ayla Thidling in the Shredder Girls as an “outstanding” performer and praising her for “a good, controlled run which fast with no hesitation”.

Click here for results from the Smith Snowboard Slopestyle

Thanks to all our awesome sponsors! 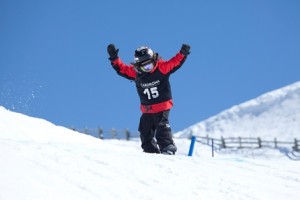