It’s been a big year for Snow Sports NZ with lots of successes for NZ’s snow sports athletes of all levels from development through to the elite athletes on the international stage.  New Zealand athletes performed well at pinnacle events including World Cups, the Winter Youth Olympic Games, The Freeride World Qualifier Tour and X Games.

Attendees of this year’s Snow Sports NZ Annual Awards were entertained by a guest speak Bud Keene. Bud is widely regarded as one of the most successful snowboard coaches in the history of the sport. He was the Assistant Coach to the U.S. Snowboarding Halfpipe Team at the Salt Lake City Olympics. The team swept Gold, Silver and Bronze medals for the men and took Gold for the women. Coaching the team full-time from 2003-2006, Bud then led the 2006 Olympic Halfpipe Team to an even more dominating performance in Torino. His small 8-rider contingent all made it to the finals and took home two Gold and two Silver medals.

New Zealand's most successful winter athlete, Jossi Wells has been making waves in the freeskiing world since the tender age of nine. The Olympian and six-time X Games medallist has been winning on the world stage for more than a decade.

One of the most versatile athletes in the sport, Jossi honed his skills as a ski racer until the age of fifteen before finding his true calling in the freeski world. He has won medals in all three X Games freeski disciplines - big air, halfpipe, slopestyle - and was the only athlete to compete in both halfpipe and slopestyle at the 2014 Olympic Winter Games where he placed fourth in halfpipe.

After a decade as one of the world’s top freeski athletes Jossi Wells finally ticked off a career goal by winning an X Games gold medal this year. With five X Games medals already to his name, his win in slopestyle at the Aspen event this January completed the set. The Northern Hemisphere season had already started well with Jossi winning a silver medal at the Dew Tour. He capped it off with a bronze medal in slopestyle at the World Cup in Korea in February. The event also served as a test event for the 2018 PyeongChang Olympic Winter Games. 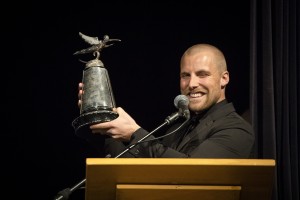