It’s been a big year for Snow Sports NZ with lots of successes for NZ’s snow sports athletes of all levels from development through to the elite athletes on the international stage.  New Zealand athletes performed well at the Olympic and Paralympic Games and the Freeride World Tour.

Attendees of this year’s Snow Sports NZ Annual Awards were entertained by a special ‘Sochi’ guest panel who gave the audience a behind the scenes look at the Olympic and Paralympic Games. The panel was interviewed by Snow Sports NZ Head Park and Pipe Coach Tom Willmott and included broadcasters Scotty Stevenson (Sky) and Michelle Pickles (TV3), Chefs de Mission Peter Wardell (Olympics) and Ashley Light (Paralympics) and John Melville from Development Snowparks the halfpipe venue contractors for the Sochi Games.

Still a relative newcomer to the sport of adaptive skiing, Corey Peters earned himself a spot on the 2014 Paralympic Winter Team off the back off some strong results at International Paralympic Committee races. Throughout January and February 2014 Corey tallied up one silver world cup medal, two gold and three silver North America Cup medals.

Corey was able to build on this success at the Sochi Games. He placed fourth in the Super Combined and sixth in the Super G, saving the best result for last with a silver medal winning performance in the Giant Slalom on the very last day of competition for the New Zealand team.

Corey’s results are made all the more impressive given the fact that he only took up sit-skiing in 2011. The former Taranaki age group and development squad rugby representative’s life was turned upside down in September 2009 when he sustained a crushed spinal cord at a motocross event, leaving him paralysed.

Sport has played a big part in Corey's life. Before his accident the former New Plymouth Boys' High School pupil turned out for Tukapa's division one rugby side, was a Taranaki age group cricketer, a keen surfer and a motocross rider. 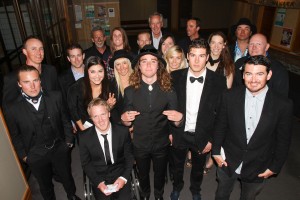