Stu picked up skiing later in life to follow the fortunes of his daughter Sophie. He took to skiing the way he attacked most sports that he loved – with a passion and exactitude that put many to shame.

Explains family friend and Snow Sport NZ Chairman of the Board, Tony Hannon, “It is Stu’s passion for the sport, its participants and Sophie’s success that we will mostly remember, but many of us will remember his friendship and loyalty not to mention his cooking skills and his presence at the after match functions. Those of us who travelled internationally with Stu could rely on a man with high integrity and openness who assisted us all on many occasions.

Always a proud supporter of his daughter Sophie, Stu would no doubt be delighted by her recent success in earning the North Island Secondary Schools Senior Women's Championship title.

“I had the biggest reason this year to try and win and so when I did it was extra special and I know that Dad would have been very proud,” says Sophie.

Sophie first experienced skiing through a school holiday ski programme at Snowplanet when she was nine years old.

“I was allowed to go as a treat,” she remembers, “as neither of my parents skied at the time. I loved it so much that they then took me to Wanaka.”

With her supportive parents, Stu and Theresa, behind her and with encouragement from Yvonne Walker from Kristin School and Adi Bernasconi from the Race Academy, Sophie took up ski racing and began to enjoy success.

A highlight of her ski racing career to date was being the first New Zealander to win an International Children’s Race at  Pra Loup in the Super G in her last youth year.

“I feel like I haven’t completed what I originally set out to do. I didn’t go to Europe this past season as I wanted to spend time with Dad, and then the NZ season didn’t turn out well but I did have the dream to represent NZ, but we will have to see…”

In the meantime Sophie will focus on completing Year 13, passing her exams and heading to university next year.

We look forward to seeing the Corser name on the start list next season. Good luck Sophie! 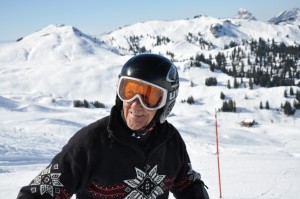