Snow Farm Handed to the Community

The Deed of Settlement for the Snow Farm was handed to Queenstown Lakes District Council Mayor Vanessa van Uden at a ceremony at the Snow Farm in Wanaka at the end of November. Also present at the ceremony were MP Jacqui Deans, members of the Pisa Alpine Charitable Trust, representatives from the Central Lakes and Otago Community Trusts, and the Lee family.

John and Mary Lee owned and operated the Snow Farm land and business from 1990 until this last season when it was sold to the Pisa Alpine Charitable Trust to be handed back to the community.

“The Deed of Settlement ensured the ownership of the Snow Farm land passed to QLDC to be held in perpetuity as a recreational reserve.  The trust will then lease back the land, manage and maintain the proposed reserve, and operate the Snow Farm business for the long term benefit of the community," said QLDC community general manager Paul Wilson.

“It is a very special place and we want to make it accessible for everyone in our community. With one season under our belts, we are now focused on getting more people cross country skiing and using the resort.

“We have a strong club and family culture and we have some incredibly talented kids coming up through the sport. They ski side by side with the world’s best every season; a fairly unique and inspiring situation for young athletes.”

With New Zealand now recognised as a key training location for international snow sports teams and with some pinnacle events on the horizon including the 100% Pure New Zealand Winter Games in August 2013, Jo confirms “it is an exciting time for the sport in New Zealand.”

This purchase of the Snow Farm has resolved any risk to the future for the winter sports that use the facility and ensures that a key element of the 100% Pure New Zealand Winter Games is firmly secured.

Funding for the land purchase was achieved with cornerstone funding from the Queenstown Lakes District Council, matching support from the Central Lakes Trust, and major contributions from the New Zealand Lotteries Grants Board Community Facilities Fund, and the Community Trust of Otago.

"The Lee family have also assisted with the finance for the purchase of the business assets on generous terms," Mr Wilson said. 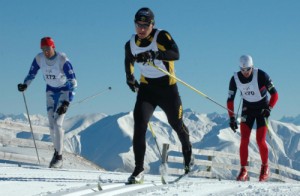