Set on the Big Skite run, the 54 gate course incorporated steep pitches and tight turns which would get the better of 31 of the male competitors on their first run. American skier Garret Driller, in New Zealand for a three-week training and competition block, was the fastest man on the hill on run one in a time of 46.48s.

The female field also suffered a high attrition rate with 21 racers failing to pass through the finish gates on their first run. Norwegian skier Rikke Gasmann-Brott held a convincing lead with a time of 50.75s.

Racing resumed after a course reset and with the top thirty racers running in reverse order. Driller was the thirtieth man to drop and with the course becoming rutted he had a “fight for the finish”.

“There were some big trenches and you couldn’t really follow your own line,” he explains. “I was just happy to stay on top and keep my line where it needed to be.”

“I was happy to be in the top 30 after the first run,” explains Richards, who started the race from bib 44 and is experiencing his first FIS level races this season. “My goal was to keep to within a six second difference of the leader on the second run.” He came close to meeting this goal, finishing 6.02s behind Driller.

Richards was second fastest in the U18 category, behind Canada’s Dawson Hill. Harrison Clay (CAN) rounded out the men’s U18 podium in third place. Podium places in the men’s U21 category were awarded to Garret Driller, Keegan Sharp (CAN) and Florian Pflug (AUT).

Rikke Gasmann-Brott was able to maintain her form for a strong second run to claim the overall win in the women’s field with a time of 1:40.97s.

“I had a good lead after my first run so I was looking for a good tactical run with not too many mistakes on my second run,” she explained. “It’s a challenging hill and my skiing wasn’t perfect but a win’s a win.”

New Zealand’s Andie Gillings (Queenstown Alpine Ski Team) made it on to the U18 podium in third place behind GB’s Hannah Loeffen-Gallagher in first and Japan’s Maya Simkowitz Nakachi in second. Ladies’ U21 place getters were Stephanie Gartner, Madison Lord (USA) and Julie Flo Mohagen (NOR).

Full results are available at: http://data.fis-ski.com/alpine-skiing/results.html 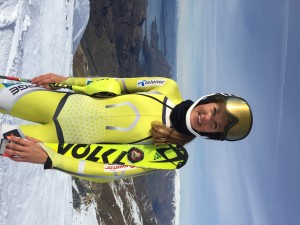