Competitors each had two qualifying runs to impress the judges with the top six female and top 10 male skiers and snowboarders earning spots in the afternoon’s finals. Competitors were judged on the technical difficulty, progression and execution of their tricks as well as the amplitude achieved above the lip of the 22-foot-high halfpipe.

Australian Emily Arthur was the standout qualifier in the women’s snowboard field, showcasing a frontside nose grab as her signature trick. Second in qualifying, NZ’s Dakota Craig delivered one of her best-ever competition runs and the judges rewarded her for spinning all directions and demonstrating a good variety of tricks.

Germany’s Sabrina Cakmakli qualified topped of women’s ski, dropping into the pipe with a switch air and achieving good amplitude throughout her run.

New Zealand’s Porteous brothers dominated the men’s ski field and battled hard for the top qualifying spot. Miguel threw down the first doubles of the day, showing some of the class that saw him finish on the X Games podium earlier in the year. However, younger brother Nico’s combination of technical tricks - including a switch combo on his two final hits - and clean execution, saw him earn the highest qualifying score.

Consistency was the name of the game in finals, with the top male and female qualifiers from each discipline once again earning the top scores.

“It’s been a fun competition, my goal was to land both runs so I’m pretty happy to have done that, and put down two good runs,” said Arthur.

Japanese competitors dominated the men’s snowboard podium. No stranger to the Cardrona halfpipe and winner of the 2016 Cardrona Games, Naito Ando held off the charge from Ryo Aono (2nd) and Ikko Anai (3rd). Ando nailed his finals run with a 900 and a 1080, some of the highest spins of the day, landed with effortless style.

The battle of the Porteous brothers never eventuated in men’s ski finals with Miguel pushing hard on his first hit, landing too deep and crashing out on both runs.

While “not really focusing on results and using today as a good warm up for Winter Games” Nico’s highly technical first run was easily enough for the win. His left 1080 with seatbelt grab into switch right nine tailgrab into switch left 1080 at the bottom of the pipe gave spectators a small taste of what Winter Games NZ World Cup competition might look like.

Spectators were also treated to a good showdown for second, third and fourth places with all three skiers delivering multiple off axis spins in both directions and boosting well out of the pipe. Japan’s Hiroo Wada took out second place, rewarded for a clean run with pronounced grabs. Switzerland’s Briguet Robin finished third. Keita Takahasi just missed out on the podium, finishing fourth.

Competition continues tomorrow (Wednesday) when skiers and snowboarders will take to Cardrona Alpine Resort’s world-class slopestyle course for qualifying rounds ahead of slopestyle finals on Thursday. 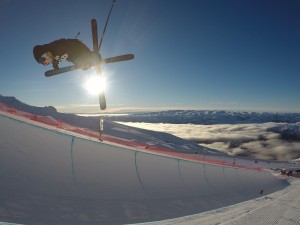