The Hafjell Olympic Slope in Øyer, just north of Lillehammer, was the venue for the race, its steep pitches and long slope well suited for this speed discipline.

With relatively little experience in the Super-G discipline and race order determined by International Ski Federation (FIS) ranking, Elizabeth faced the tough task of starting at the very back of the 45-strong field of female competitors.

“I’ve never raced Super-G (at this level) before so I didn’t really have high expectations,” she explains. “I was aiming for a top 30 finish and thought why not just go for it.

“Standing in the start gate I was quite nervous but I just tried to stay focused and stay in the moment, not worry too much about what was to come.”

Cold temperatures had kept the snow firm under foot and the course was still in good condition. Elizabeth made a confident start, finding her line in the top section and managing to hold it on the rollers.

“The middle section could have been better,” she explains, a slight mistake costing her some time but not her nerve. Elizabeth crossed the finish line in 20th place, well above her own expectations.

“I was feeling good in the start gate, training had gone well and I was focused on a couple of technical points,” he explains.

Things went well for Jackson at the top of the course but a mistake just before the midway point proved costly.

“I made a mistake on a critical part of the course, found myself in the back seat and going too straight, flipped over and lost both skis.”

Jackson came away “a bit gutted” but otherwise unscathed and determined to “keep focused and keep striving. Tomorrow is another day.”

Elizabeth and Jackson will take on the Alpine Combined tomorrow. The combined event tests a skier's ability to handle both the speed and technical aspects of Alpine skiing. Racing will begin with another run of Super-G in the morning followed by Slalom in the afternoon. 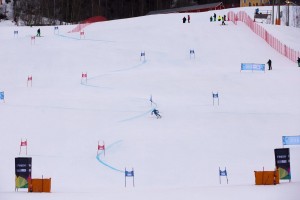