Kronplatz, Italy- (13 February 2014) – New Zealand ski cross racer Jamie Prebble (Christchurch) has achieved a podium result at the Red Bull Kronplatz Cross in Italy. The event, now in its third year, attracts a strong field of world cup competitors and a crowd of over 5000 spectators.

Representing their country, racers compete in teams of three and must reach the bottom of the slope by crossing all kinds of obstacles, jumping over a hut and speeding through large ice sculptures.

Jamie joined forces with Borja Gregorio from Spain and Blaz Ogorelc from Slovenia to make up “Team internationals”. The combination was a success and the team finished in third place behind Team France in first and Team Switzerland in second.

"It was a crazy race mixed with tough snow conditions and some creative course features making exciting racing,” explained Jamie after the race. 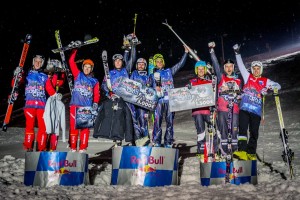