Placed third after his first run and 0.44seconds behind the leader, Corey put together a tactically smart second run. Making good use of the fall line to generate speed onto the flat section of the course Corey shot into second place ahead of Sochi gold medallist Christoph Kunz (SUI).

Races continue in St. Moritz on Tuesday (3 February) with another edition of giant slalom, before continuing on Wednesday (4 February) and Thursday (5 February) with slalom races. 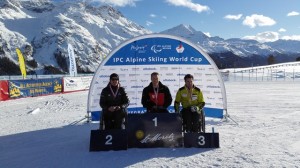