After high winds forced the postponement of Friday's scheduled Slopestyle qualifying session, a full day of qualifiers and finals went down on Saturday at the Valmalenco 2015 Junior World Championships.

Fifty two competitors were split between two heats and had two runs to earn their best score with the top six from each heat then moving through to finals.

NZ athlete Miguel Porteous (Christchurch) was the very first competitor of the day to drop into the course and skidded out on the icy landing on his first jump. A switch right double nine on the second jump of the second run, the first time he’d landed the trick in competition, helped boost the score and for a while Miguel sat in sixth place, on the bubble to make finals before being bumped into seventh place by one of the last competitors.

Cardrona NZ skier Beau-James Wells came out of the blocks firing, scoring 87.6 on his first qualifying run and booking his spot for the finals. Beau held on to the top score for most of the morning before younger brother Jackson screamed through with a score of 89.8 to claim the number one qualifying spot, Beau-James in second.

Finn Bilous (Wanaka) put down a solid first run for a score of 69.00 but knew he would have to do more to meet his goal of qualifying for finals. He dutifully stepped up for run two, tidied up his rail tricks and went bigger on the jumps to chalk up a score off 77.00 points and a start in the finals.

Three from four athletes through to the 12-man finals and Beau-James and Jackson the top two qualifiers; the serious pressure was now on for a podium finish.

Finalists had three runs to post their best score. Finn started strong, landing his first run but Beau-James and Jackson would struggle with both their first and second runs.

“I was starting to get stressed,” admits Beau. “I knew if I landed the same run (from qualifying) I had the potential to podium. So I turned my attitude around, listened to my music and started to get happy not stressed.”

His strategy worked. Beau came through with a well-executed run for a score of 89.6 to move into second place behind Switzerland’s Luca Schuler on 91.00.

Finn put down the best competition run of his career to date, scoring 77.00 on his second run and finishing ninth overall.

A big crash for Jackson on his second run would call for his knee to be strapped up before he could make his third and final run, the very last competitor of the day. He came through with a clean run but it counted for little, the judges unable to watch the last two jumps because the batteries had run out on the camera relaying footage. Back to the top of the course for a re-run.

Maintaining his focus, Jackson went for his sixth competition run at the end of a very long day and came through with a score of 87.00 for fourth place.

“I was hoping for a podium but I’m still pretty hyped with my result,” he said.

Action from the 2015 Junior World Championships continues on Sunday with halfpipe qualifiers ahead of Monday's halfpipe finals. 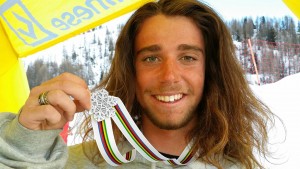