Reigning Olympic champion and world snowboarding legend, Shaun White is heading to New Zealand next month to compete at the Audi quattro Winter Games NZ 2013. He will be joined by a host of elite snow sports athletes with more than 25 nations confirmed so far and many more expected to register in the run up to the event that begins on 15 August.

White won Olympic gold in snowboard halfpipe at Vancouver 2010 after dominating the same event at the inaugural Winter Games NZ six months earlier. Still regarded by many as world number one in halfpipe, he will face stiff competition at Cardrona Alpine Resort this year from the likes of Iouri Podladtchikov from Switzerland and Finland’s Markus Malin who took superpipe silver at January’s X-Games Aspen.

Compatriot Peetu Piiroinen, 2010 Olympic silver medallist in halfpipe and overall champion on the World Snowboard Tour for the past four years, is a strong contender to take out the FIS Snowboard Slopestyle Men’s World Cup also at Cardrona. The finals on 19 August will be a preview of the event’s Winter Olympic debut at Sochi, Russia next February.

The Finn will be up against top riders like Canadian Mark McMorris, this season’s world number one-ranked Slopestyle World Tour rider with wins at the Burton US Open, X-Games Aspen and Dew Tour Mountain Championships, and Norway’s Torstein Horgmo, currently ranked third.

Elite women athletes also face pre-Sochi showdowns at FIS World Cup events in halfpipe and slopestyle for both snowboarding and freeskiing. Notable entries so far include the USA’s Devin Logan and Jamie Anderson, both among the favourites for Winter Olympic gold in 2014. Logan finished first in the 2011/12 AFP overall rankings, won gold in all three freeski events at Winter Games NZ 2011 and is returning from injury. Snowboarder Anderson is the current overall leader for slopestyle on the World Snowboard Tour taking gold and silver respectively at 2013 X-Games Aspen and Tignes.

Cross-country skiing, which kicks off the Audi quattro Winter Games NZ at Snow Farm on 15 August, is well represented by a strong US team including two-time, Olympian Andy Newell and 2012 national champion, Noah Hoffman. They will be joined by other top names looking to add a competitive edge to their Olympic build up including Alex Harvey from Canada who took sixth overall in the 2011-12 FIS Cross-Country World Cup and just missed out on an Olympic medal, finishing fourth in the Team Sprint event at Vancouver 2010.

As well as winter sports powerhouses like the US, Canada and Switzerland entries have been received from nations as varied as Chinese Taipei, Ireland, Belgium and British Virgin Islands.

Winter Games NZ chief executive, Arthur Klap said the quality of entries means this year’s event is shaping up to be the best ever.

“The 2013 Games is a vital stepping stone to Sochi and the importance of Olympic qualification is clearly attracting all the top names to New Zealand. I would expect many of the medal winners here in the Southern Alps to be on the podium in Russia next February and this is our chance to see them compete first hand,” he said.

“Shaun White’s performance at Winter Games NZ 2009 will long be remembered and it’s a testament to our position as one of the world’s top five winter sports events that he is scheduling a trip down under along with so many other top athletes as part of their Olympic preparations.” 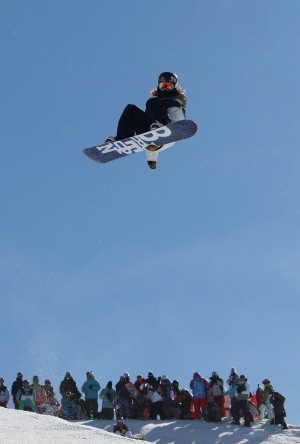