Only the top 12 male skiers in the competition made the cut to compete in Alaska and the finals in Verbier, Switzerland scheduled to take place 1-9 April. Lee went into today’s competition ranked eighth overall after placing 4th, 8th and 12th in the first three Tour stops. Today’s result see him move up into sixth place.

Lee chose a technical line through some of the venue’s most exposed terrain and scored highly for maintaining control and fluidity throughout his run. He stomped his landings off the huge cliff drops and threw an impressive backflip off the second hit.

“Competing in Alaska has been one of the best experiences of my life, and maybe the most exciting competition to date,” says Lee.

“Although I made a few small mistakes in my run I am stoked with the way I skied. I really just wanted to go fast and big, and it felt so good to rip a backy at the top!

“To pick up my first FWT podium in Alaska of all places is way beyond my expectations for this season.”

French skiers Loïc Collomb-Patton and Léo Slemett took first and second places on the men’s ski podium. Collomb-Patton opened the men’s field with a powerful run, taking a large double-set into an impressive 360 high on the venue while Slemett dropped into a similar line but executed a smoothly stomped backflip and finished strong in the lower venue.

Live replay available at the this link. Click on tags to find each rider’s run. 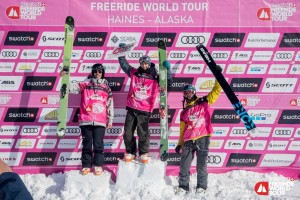