Vallnord-Arcalís, Andorra (15 February 2017) – Wanaka skier Sam Lee is charging through his first season on the Freeride World Tour, yesterday claiming a fourth place finish at the second tour stop in Andorra. The result comes off the back of an eighth place finish at the competition opener staged at the same ski area in the Pyrenees a week ago.

“After placing top eight in the first event I felt like I should shoot for top five in this one,” says Sam.

Brilliant sunshine marked the competition originally destined to be the season opener for the 2017 Swatch Freeride World Tour in Chamonix-Mont-Blanc, France. Fifty of the world’s best skiers and snowboarders finally competed in the spectacular event that was rescheduled due to snow safety concerns in the French Alps.

Conditions were challenging for both riders and organizers. Snowfall over the last week brought fresh accumulations to the face and changeable weather resulted in a slight crust forming on the snow surface, making turning conditions variable in some parts of the venue. Despite these challenges and with the aid of the sun which softened the snow during the day, the athletes demonstrated their finest freeriding skills on the Baser Negre venue, situated at 2700m.

“I had a hard time picking a line that I thought could score highly enough, so I was super nervous at the top still trying to work out exactly what to ski. I settled on my line with only a few skiers before me, and still ended up improvising slightly mid run. The only thing I was certain of before heading to the top was the cliff I was going to flip!”

There was no shortage of action in the ski men category as Léo Slemett (FRA) edged out fellow Frenchman Loïc Collomb-Patton (FRA) with the judge’s favourite line of the day that started with a 360 at the top of the venue and terminated with a full-throttle double-set air into a stomped backflip. While many of the top riders landed high amplitude flips and spins, it was Yann Rausis (SUI) that was able to land the most impressive upper-venue air which secured him the third place position on the podium.

“I’m mega happy to come away with fourth place at the second stop of the Tour,” says Sam. “I was extra nervous before the start today, so I’m double happy that it worked out.”

Riders have just one more chance on March 6th in Fieberbrunn, Austria before the best two results of the 2017 season are used to determine whether they advance beyond the qualification cut for the final two events in Haines, Alaska and Verbier, Switzerland. Sam Lee is currently ranked seventh and must be in the top 12 to qualify to compete in Alaska. 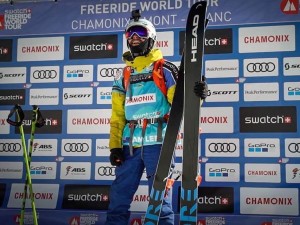