Ischgl, Austria –(3 April 2014) – New Zealand snowboarder Sam Christie has qualified in first place in slopestyle at the 2014 VÖLKL World Rookie Finals in Austria. The competition is one of the biggest youth events of the northern hemisphere season attracting more than 110 young snowboarders from 24 nations.

Within today’s 41 strong field, every rider had the chance to impress the judges with two runs – the best run counted for the ranking. The six best female and the twelve best male Groms qualified to the finals which are scheduled for Saturday, April 5th 2014.

The Grom boys showcased a high level of riding “who would have no problems in competing in the Rookies age category”, as head judge Giulio Neri commented.

Sam Christie finished as the best rider of the day with a huge run including a Frontside 720 Mellon Grab on the first kicker, a solid Backside 720 Mute on the second jump, a massive Frontside 360 out of the toblerone and finishing it off with a 360 out of the rail. 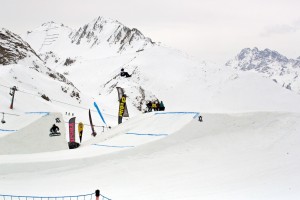