Battersby, who earlier in the week placed 11th in Slopestyle, was looking for redemption after not being able to land the run she had wanted.  "She got stuck in early in the Big Air training session and was the first of the ladies to spin over the massive 80-foot jump," said NZ's Head Park and Pipe Coach, Tom Willmott.  "Stomping smooth 360s in training, Rose knew she needed a 720 or better to become the World Champion, and got within a whisker on her second judged run after hitting the knuckle in her first run.  She skidded out on the landing and was unable to take out the title but was happy to get on her first major event podium."

"Rose showed plenty of courage today, battling a jump which challenged many of the best freeskiers in the world,” said her coach Peter Legnavsky.  “This podium at her first AFP World Champs is a great start to a promising career."

Battersby, currently ranked fourth Overall on the AFP World Tour competes in halfpipe today with a view to challenge for a season-end podium position. Jossi and Beau James Wells are also up in the final event for the 2012-13 season. 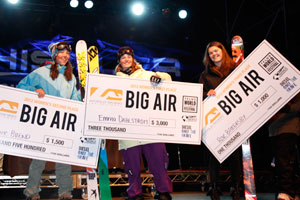