Over 100 competitors lined up for the day’s event and were treated to blue skies, warm temperatures and perfectly still conditions ideal for competing. The top 16 riders would progress through to finals.

Tiarn Collins was the first of the Kiwi riders to drop in to the course and put down a clean run with back to back 7s. He then stepped it up with a front 10 but went a bit too big and couldn't ride out of it.

JJ Rayward was next to drop. His rails had been a highlight of the practice but unfortunately it was this area of his run that did not go to plan. He managed to complete both runs but each had a slip up. On the first rail feature, while attempting a switch front board pretzel (rotating 270 degrees the opposite way out) he didn’t quite get the rotation out of the trick. In the second run it was the second rail which got the better of him while attempting a cab 180 on, front 360 out.

Carlos Garcia Knight competed in the second heat. His first run was near perfect until the last feature where his backside double cork 1080 was a little under rotated. On his second run he managed to fix the mistake and put down a clean, technical run with back to back 1080s and earn the top spot in the heat.

Finals kicked off late in the day after the lifts had closed to the public. Carlos managed to land his run but had a slight wobble on a rail feature which affected his score and saw him finish eighth. Nevertheless, he was happy to walk away with a top 10 finish and has his sights set on a podium next time round. 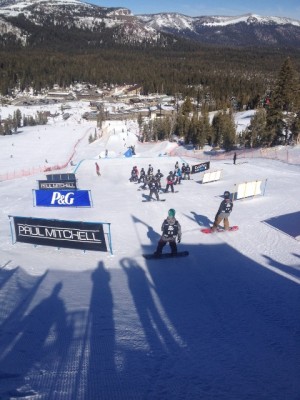