Rebecca says that she is extremely grateful for the opportunities snowboarding has given her, and that it has been a privilege to have represented New Zealand at international competition, including the 2010 and 2014 Olympic Winter Games, over the last eight years.

“It’s been very special to be part of such powerful and inspiring events as the Winter Olympics and Audi quattro Winter Games NZ, that bring together so many athletes, and help to inspire people around the world,” she says.

Looking back on her sporting journey, Bex says that she has some amazing memories.

“I have loved getting to see different places around the world, and being able to have experiences that I can cherish forever.  I owe a huge thank you to my sponsors and to everyone who has supported me along the way to make my journey possible.”

Bex says she is proud of her achievements in snowboarding and plans to take the wide range of skills and experience she has gained from travelling, training and competing at an elite level, into her future endeavors.

She has been living in Sydney for the last year, and is enjoying taking part in lots of activities that were put on hold while she focused on her snowboarding career. She has joined up with a soccer team, spent a lot of time rock climbing, and is teaching Archery at the 2000 Summer Olympics venue in Sydney Olympic Park.

“I will never stop enjoying sport, and I am really enjoying learning about some of the other sports that I haven’t spent much time doing previously”.

Following the completion of her Psychology degree earlier this year, Bex is currently finishing off her Post Graduate studies, before pursuing a career in Psychology or HR.

Bex said she is really excited to watch the Winter Games this season, and wishes all the athletes well.

Snow Sports NZ wishes Bex well in her future endeavours and congratulates her on a successful snowboarding career. 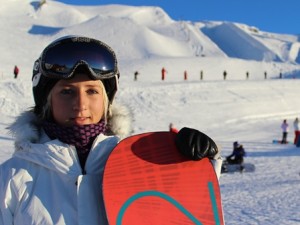