Fresh snow the day before and flat light made for challenging racing in Monday’s GS but competitors, many of them competing at FIS level for the first time, coped well.

“I think the surface conditions were way better than anyone expected them to be with all the recent snowfall and the course workers did an awesome job to keep the courses maintained for a field of 130 plus,” said Piera Hudson.

Finding herself sitting in second place after the first of her two GS runs, Hudson went on to win the women’s race 0.46s ahead of the USA’s Stephanie Lebby in second, and 3.33s ahead of third place finisher Storm Klomhaus (USA).

“The first race of the season is always interesting,” said Hudson. “I wasn't fully in race mode so to be in second position after first run with nearly a second on the clock to make up was good for me because it forced me to step it up which I thankfully did.”

“Race conditions weren't the greatest with flat light and fog covering much of the course and soft snow making it hard to put in strong turns but well done to Cardrona and the Wanaka Ski and Snowsports Club in getting off the races,” said Barwood.

For Hudson and Barwood the races come as a solid warm up ahead of the New Zealand Alpine National Championships and Coronet Cup scheduled to be held at Queenstown’s Coronet Peak Ski Field next week. Hudson is the defending NZ women’s Giant Slalom and Slalom champ.

Racers born in 2000 and turning 16 this year were eligible to compete for the first time at FIS level competition at the Cardrona races and several of the Kiwi contingent proved themselves up for the challenge.

Wanaka’s Ben Richards - who enjoyed a highly successful Northern Hemisphere season racing, and securing podium spots in prestigious junior level events – put down a blistering first run time in the GS which saw him leap frog from start bib 89 to 12th place. An error on his second run saw him ski out of the course.

Battling a cold, Piera Hudson was unable to compete and Emma Gamson was the fastest of the NZ women in 13th place. Anja Schneider (SUI) topped the podium with Lisa-Marie Flachberger (AUT) second and Christina Metzner (AUT) third.

Hamish Garrick (QAST) finished in 12th and the fastest Kiwi over two run. Ben Richards put together another impressive performance with the third fastest time on the second run. He finished 16th overall.

National men’s team members Adam Barwood and Willis Feasey (WSSC) opted not to compete in the Slalom, keeping their focus on training for next week’s National Championships.

The National Championships and Coronet Cup begin on Monday and are scheduled to run until Thursday next week. With fresh snow falling, the Coronet Peak race department are working hard to get the courses race ready. 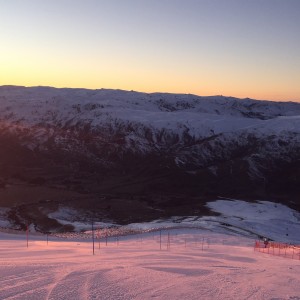