Prior Podiums at Community Cup

Breckenridge, Colorado (8 April 2013) - It was a beautiful day in Breckenridge for the first annual ‘Community Cup’, a rider-driven progression focussed women’s snowboard slopestyle event.  As a 5-star World Snowboard Tour event counting towards the 2013-14 season, many of the world’s best riders were in town to push their skills and showcase their riding on the fun course.  In the middle of a spring training camp, and at their second home at their northern hemisphere training base, the event was a great opportunity for the New Zealand team to perform.

Christy Prior had the course on lock in the days building up to the competition, and was the form rider blazing through the qualifying round in first place.  Stefi Luxton had suffered a heavy crash just two days out from the competition, but landed a smooth and solid first run to progress to the finals in fifth place, while Rebecca ‘Possum’ Torr also played it safe after sitting down on her first run, to progress in fourth place in the qualifying round.  In the finals the top six from qualifying were met with the top four riders from the World Snowboarding Points List who auto-qualified direct to finals.

In the first run of finals many of the competitors struggled with the change in speed on the course as the snow softened in the midday sun. Second runs were landed though: Stefi Luxton put down the same run she had landed in the qualifying round but with better execution including a corked cab 540 on the first jump followed by backside and frontside 360s and was sitting in third position.  Possum Torr landed an impressive frontside 540 to cab 540 to backside 540 combo on the three jumps at the top of the course which had her sitting in fourth position.

Prior landed the run she had been working on all week – a wildcat (backflip) on the first jump into her trademark frontside rodeo 720 off the toes, into a corked backside 540 on the jump section followed by a switch boardslide to fakie, a backside 180 over the barrel jib and a switch tail 270 on the last rail feature.  Scoring 90 points out of a possible 100, Christy jumped into first place.  Last to drop, the current World Snowboard Tour Champion Sarka Pancochova, landed an excellent run to score 92 points and take the lead. Other riders had things go their way in the second runs also including recent European X-Games winner Silje Norendal from Norway who moved into third position.

With one run to go, all three of the New Zealand Team had achieved their performance goals for the day, and it was time to step it up.  Luxton was up first and added a huge backside 720 to her run on the third jump – her first in competition, which improved her score; Possum and Prior also gave the backside 720 a go on the third jump to improve their run composition although both struggled with the landing.

When all was said and done, the New Zealand team had a very strong day of riding and competition, were all very happy to have landed their ideal runs and have an opportunity to challenge for the lead with new competition runs.  They all achieved their best results of the season with  Christy Prior very happy to get back onto the podium finishing in second, Stefi Luxton finishing in sixth and Possum Torr right behind her in seventh place.

"What a great way to end the season!" commented Snow Sports NZ Head Park & Pipe Coach, Tom Willmott.  "After all of the travels of the Olympic qualifying period, pressure and jockeying for position, it was fantastic for the girls to have an opportunity to cut loose on their second home turf, and compete in a relaxed environment. All three will take plenty of confidence from this performance and look forward to building on it in the future." 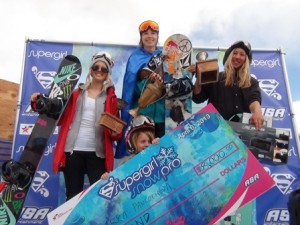 9 years ago
Christy Prior, Community Cup