Podiums for Hall & Peters Ahead of Paralympic Games

Adam, who will be looking to defend the gold medal he won in Slalom at the Vancouver Games in 2010 and also has his sights set on a top level result in the Super-Combined says, “I am extremely confident and happy with where I am.”

While they were pleased with their overall performances, the New Zealanders acknowledge that mistakes were also made, both posting DNFs in one Super G race. Adam was ahead at the first split by almost a second and looked to have a solid run in place before missing the last gate at the finish. Corey looked set for speed in his run, also posting the fastest split time before crashing five gates from the finish.

“When you’re pushing it that hard there’s always that chance it can go either way and today it didn't go the way I would've liked,” commented Corey. Adding, “but all in all, a great week with two second place podiums and just missing out on a third podium in downhill.”

“With 20 odd more days until the games we will continue to fine tune things and turn up to Sochi the best prepared we can,” said Adam.

The pair will now travel back to their base in Winter Park, Colorado before flying to Europe for their final days of training ahead of the Paralympic Winter Games. They will be joined in Sochi by para-snowboarder Carl Murphy who has recently returned to training following an injury in December.

Attitude Pictures will present New Zealand audiences with 44 hours of free coverage and highlights packages as well as documentaries on competing athletes, via its innovative new web platform AttitudeLive.com. 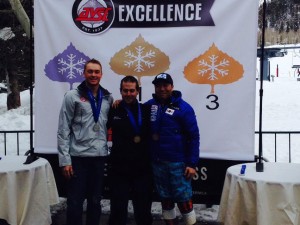